Improving your knife skills is one of the easiest ways to become a more efficient cook. This tutorial shows you how to hold a chef's knife and cut with it. 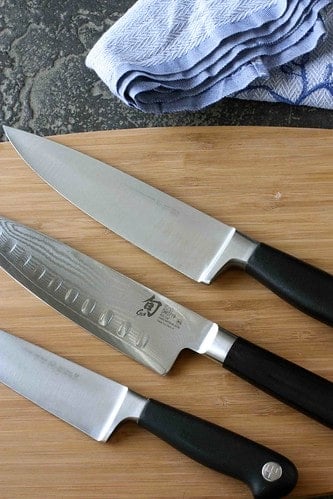 Learning how to hold a chef's knife and properly cut with it was one of the most life changing things (in the kitchen, that is) that I ever did. Just learning some basic knife skills has saved me hours in the kitchen, making meal prep efficient and far less frustrating.

Years ago, when my husband and I lived in New York City, I took several cooking classes at The Peter Kump Cooking School, now renamed the Institute of Culinary Education. There was one class that completely changed the way I prep food - Knife Skills, taught by Norman Weinstein, who is known as New York's best Chinese cooking teacher. We did it all in that class - chopping, dicing, filleting, boning, carving. However, as I was at the beginning of my home cooking career, the instructions on holding and chopping with a chef's knife were a revelation to me.

How to hold a chef's knife:

Grip the base of knife blade, just in front of the handle, with your thumb and index finger. Wrap your remaining three fingers around the handle of the knife. 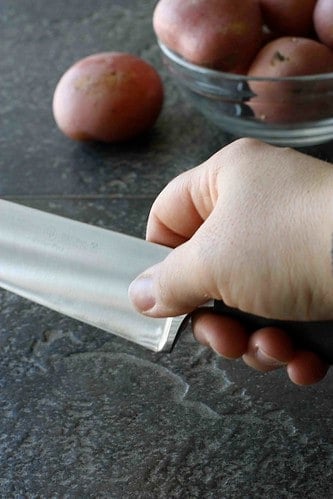 This felt awkward for me at first, but after a few days of forcing myself to hold the knife this way, I found that I had increased control of the knife. Now it just feels right and I can not imagine holding the knife any other way.

How to cut with a chef's knife:

If you ever find that your arm gets tired when you are prepping vegetables for dinner, this technique will help you immensely. Have you ever wondered why it is necessary to use a chef's knife with such a long blade? Before I took Mr. Weinstein's class, I had never even held a chef's knife. I was a paring knife-only kind of gal and was certain that I would lop off a finger with any knife with a blade longer than four inches. However, I learned that the long blade enables the cook to make a long diagonal slice that feels almost effortless. Let me show you what I mean.

When cutting, start with the blade area near the tip of the knife. Instead of cutting straight down, run the the knife through the vegetable or meat by sliding the knife away from you while exerting downwards pressure. Depending on the thickness of the items you are cutting, you will finish halfway or near the butt end of the blade. Voila - easy and efficient. 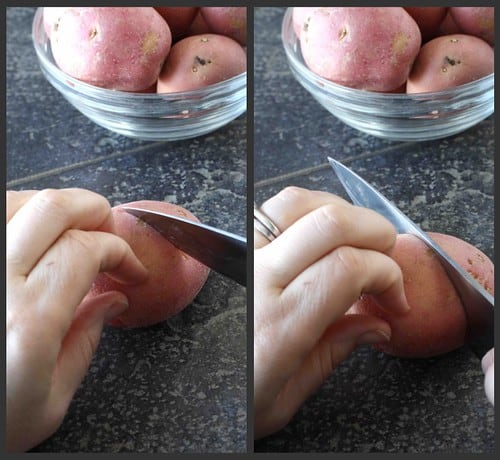 To avoid any kitchen accidents (believe me, I had my share of them before I learned my lesson), curl your fingers under so that your knuckles are closest to the knife and your fingertips are well out of the danger zone. This will feel awkward at first but, with practice, it will become natural and you will come away with all ten fingers in working order.

Other how-to tutorials on this site:

How to Poach Chicken Breasts
How to Chop Parsley & Cilantro
How to: Roast a Bell Pepper
How to Freeze Quinoa