This Lean Bison and Barley Soup is the ultimate healthy comfort food! Whip up a batch to keep you warm on a chilly evening. 289 calories and 6 Weight Watchers SmartPoints 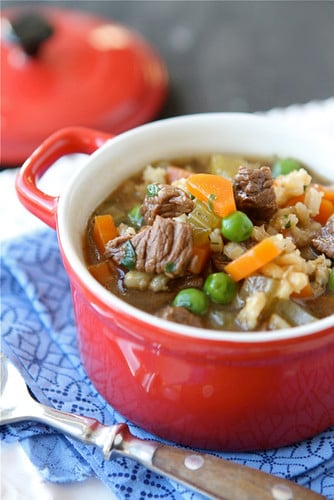 This Lean Bison & Barley Soup is a "must try" recipe! While I still have a soft spot in my heart for beef-packed soups, subbing bison for beef is a great way to lighten things up.

Bison meat has been adopted as a popular alternative to beef in the buffalo burgers found on menus around the country and is becoming more readily available in supermarkets and warehouse stores, such as Costco. But what's all the fuss about? What's the big deal about bison meat?

Well, since you asked...or was that me? Well, somebody asked. So, here we go:

Is bison meat good for you?

There's a reason that Readers' Digest listed bison as one of the top five foods that women should eat. Each 3.5 ounce serving of the lean meat is packed with iron...36 percent of the daily recommended amount, to be exact.

I don't know about the rest of you, but my average intake of iron is abysmal, something I lamented about when I posted my Baked Pasta Shells with Beef, Sundried Tomatoes & Spinach. I had just started using a food tracker, which let me know how pathetic I was, ferrically-speaking (that's going to be my new favorite iron-related phrase).

Okay, so it's high in iron. What else? Well, bison meat also boasts high levels of protein and Vitamin B-12 and lower calorie and cholesterol counts than beef, chicken or pork. I've got your attention now, don't I? Take a look at this nifty little chart to see what I mean. 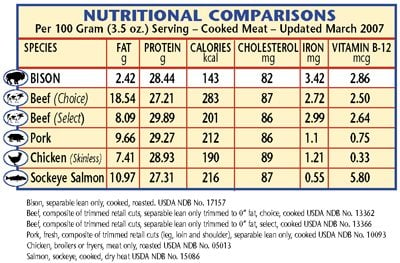 How are bison raised?

Bison live and feed primarily on grasslands, spending a minimal amount of time in feedlots. According to the National Bison Association, the animals are not subjected to chemicals or hormones.

What implications does this have for the consumer? Well, since we are all here because we love food, one of the primary benefits of grass-fed creatures (bison, cows, etc.) is that the meat often tastes better...in my humble opinion, that is. And, if given the choice, I will definitely choose the meat that has not been pumped full of antibiotics and hormones. Call me crazy.

Of course, there are plenty of environmental implications surrounding this issue, but we're here for soup, so I'm going to side-step those issues for the time-being. 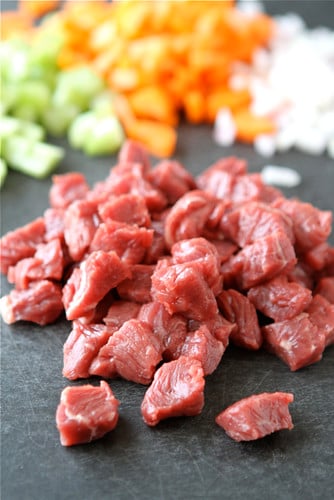 Bison meat tends to be pricier than most cuts of beef. However, I'm not suggesting that you completely forego beef in favor of bison - I know I'm not. However, you may want to consider working it into your meal rotation occasionally. It's a nice change from the usual and you just can't beat the health benefits.

Is this soup kid-friendly?

For parents out there, my kids would like you to know that they gave this soup a very enthusiastic double thumbs-up. In fact, they practically licked their bowls clean.

Bison meat also works beautifully in meat fondue, cooked in boiling broth and dipped in a variety of savory sauces. See our Apres Ski feature in FoodieCrush Magazine (on page 64 of the e-magazine) for details on fondue (bison and cheese varieties) and accompanying dipping sauces.

How to make bison barley soup:

First, brown the cubed bison meat, seasoning it as you go. Set it aside in a bowl while you cook the aromatics - shallots, celery, carrots and thyme. 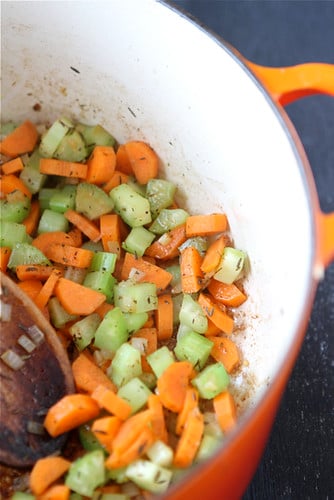 Stir in the barley, beef broth, water and bison meat. Bring to a boil, reduce heat to medium-low, cover and let simmer until barley is tender, which takes about 60 minutes.

Add the frozen peas and heat for additional 5 minutes. Taste and season with additional ground pepper, if desired. Stir in chopped parsley and serve it up! 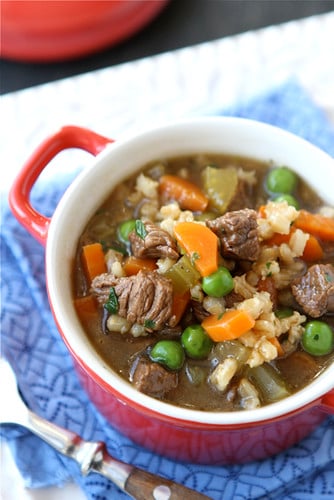 Other recipes with bison meat: 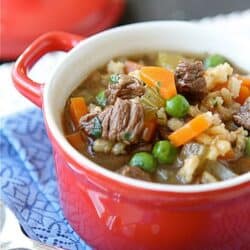