Punch up the flavor of a whole wheat naan pizza recipe with savory Marsala mushrooms, caramelized onions and fontina cheese for a simple vegetarian meal. 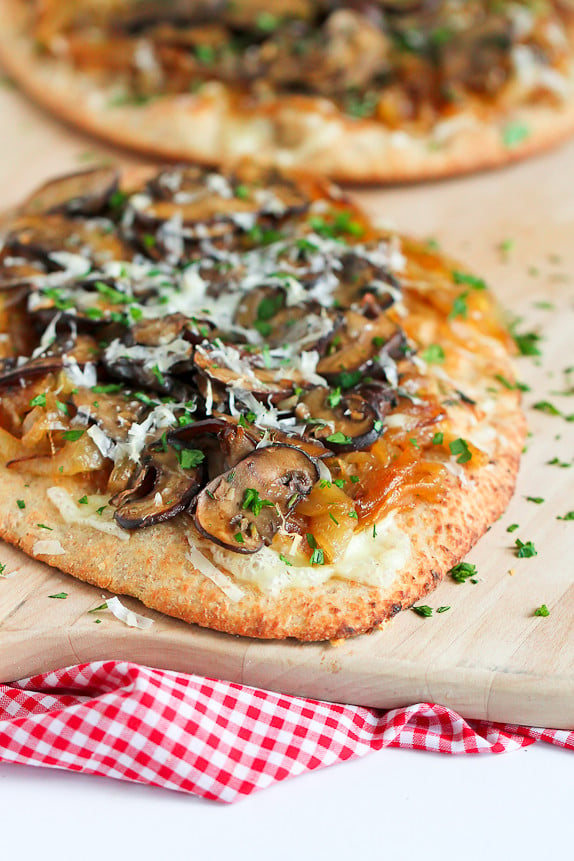 When you love to cook, there's nothing more rewarding than preparing a meal with friends who love to cook and eat as much as you do. And when those friends are a bunch of food bloggers, who are full to the brim with awesome recipe ideas and cooking tips (and a penchant for busting out the dance moves), making dinner quickly turns to "master class meets Uptown Funk".

Last month, I headed to Lake Tahoe to a retreat organized by my friend, Lori of Recipe Girl and had the opportunity to spend the weekend cooking and sharing ideas with a group of talented women. We talked, we ate, we shared ideas, we drank, we brainstormed and we ate again. 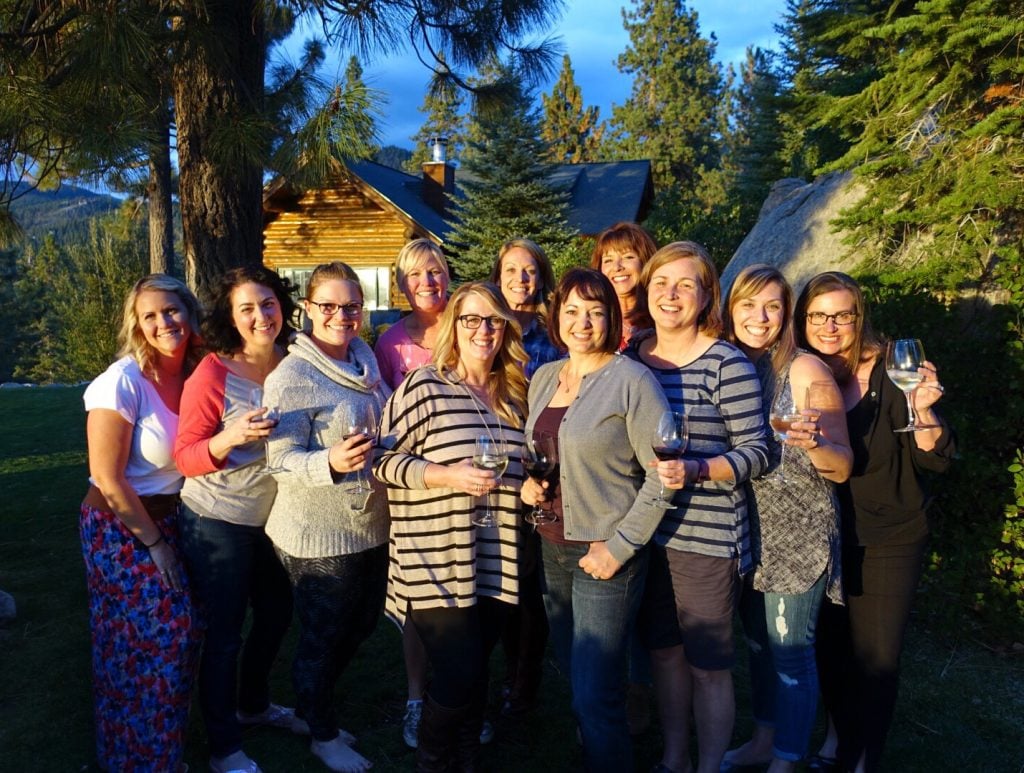 {Back row (left to right): Lori of Recipe Girl, Lauren of Climbing Grier Mountain, Sandy of Reluctant Entertainer Front row: Shawn of I Wash, You Dry, Andi of The Weary Chef, Megan of Country Cleaver, Cheryl of Tidy Mom, me, Elise of Simply Recipes, Dorothy of Crazy for Crust, Cathy of Noble Pig}

On the final night, we cooked up a memorable meal of beef tenderloin fillets, topped with caramelized onions and mushrooms, accompanied by baked potatoes, a beautiful pear and lettuce salad and plenty of Noble Pig wine (from Cathy of the blog, Noble Pig). I was in charge of preparing the mushrooms, and since fillets practically beg for a pile of Marsala-simmered mushrooms, that's what I made. When seasoned with thyme, salt and pepper, the mushrooms are good enough to play a starring role in any meal. 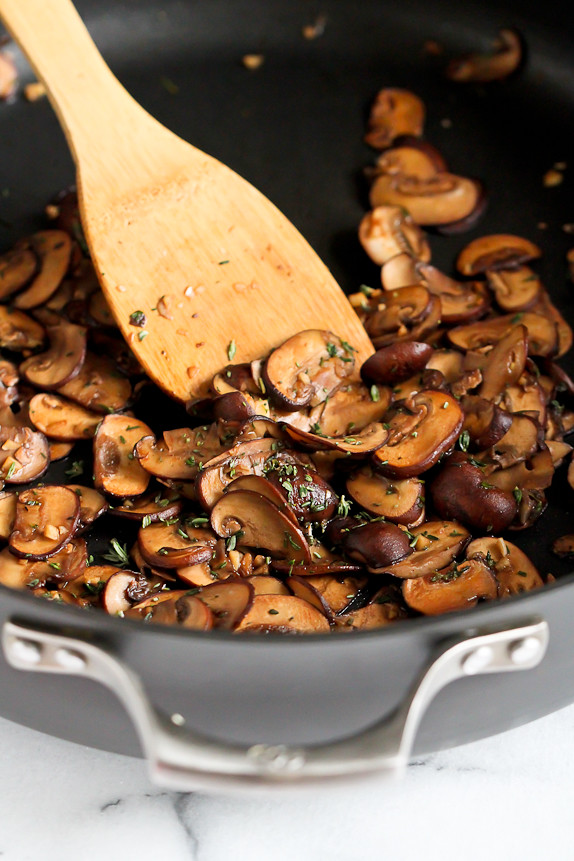 When I got home, I was craving another dose of Marsala mushrooms and caramelized onions, but wasn't in the mood for beef. Out came the whole wheat naan bread (these are the ones I use for quick meals), which is often my fall-back for easy pizzas. After preparing the Marsala mushrooms and caramelizing the onions (see How to: Caramelize Onions for step-by-step directions), I piled everything on top of the naan bread, along with some fontina and Parmesan cheeses.

Eight minutes later, they came out of the oven, golden brown and ready to eat! 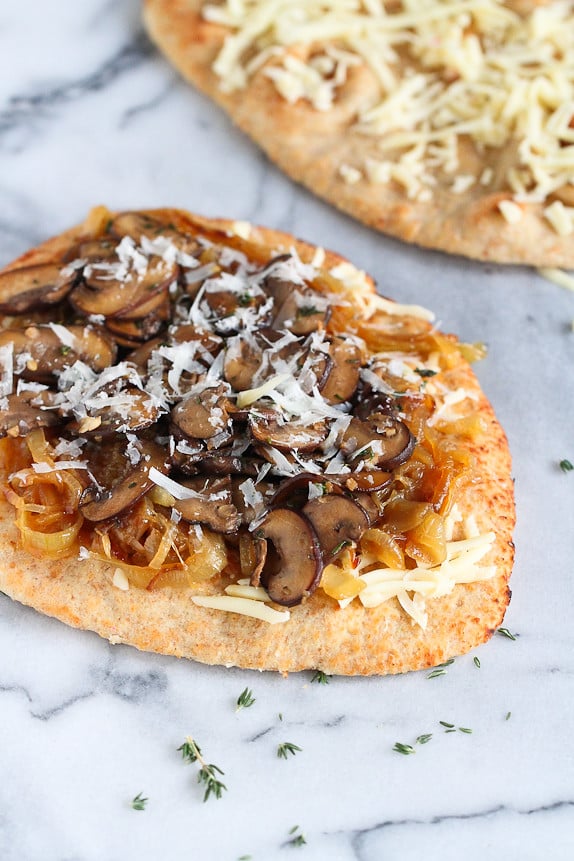 This combination of toppings would be just as good on top of regular pizza dough, so feel free to swap out whole wheat or regular dough for the naan bread. 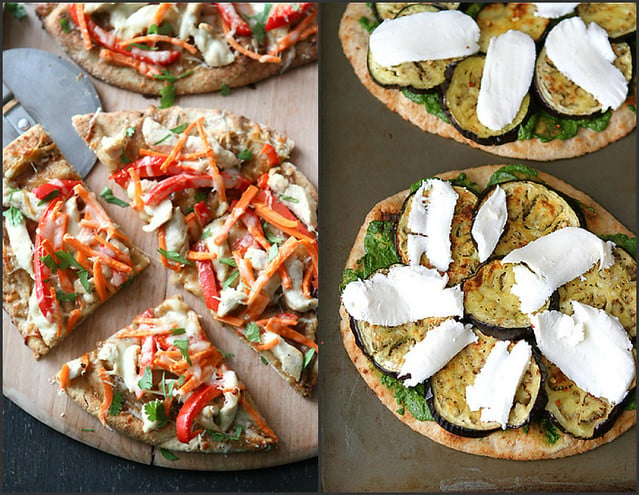 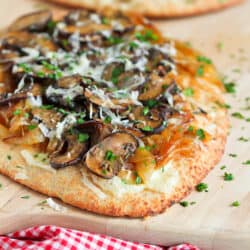