Steer clear of the cole slaw! That has always been my motto at summer barbecues. There is something about limp cabbage salads drenched in sun-warmed mayonnaise and permeated with the harsh taste of raw onions that makes me lose my appetite. However, when I made a Teriyaki Flank Steak Sandwich with Napa Cabbage, Red Peppers & Carrots a few weeks ago, I was reminded of the inherent crispness of Napa cabbage. With Asian flavors on the mind, I whisked together a dressing that included rice vinegar, lime juice, sesame oil, and ginger. And then came the kicker. A potent little chile that the food world likes to refer to as a serrano chile. I call it the devil’s pitchfork. Not remembering where serranos fell on the heat scale, I popped a tiny piece into my mouth – and then proceeded to latch my lips to the cold water spigot. Hence, the use of half a chile in this recipe…seeds and membranes removed!

Despite my run-in with the serrano chile, this is possibly the best slaw I have ever eaten. Between the crispness of the cabbage and carrots, and the tangy and sweet dressing, this slaw will not be the last dish standing at your next potluck or barbecue. 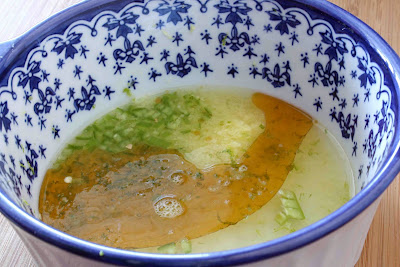 Cut a 1 1/2 pound Napa cabbage in half lengthwise, core it, and cut crosswise into 1/2-inch slices. 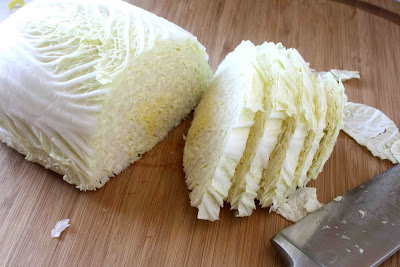 Separate the cabbage leaves into a large bowl. 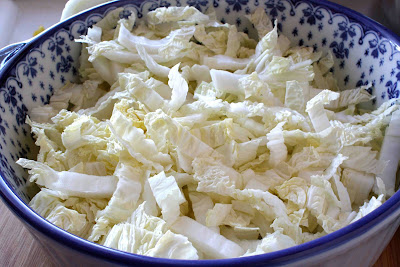 Pour the dressing into the cabbage mixture and toss again. Let stand for 10 minutes, tossing occasionally. 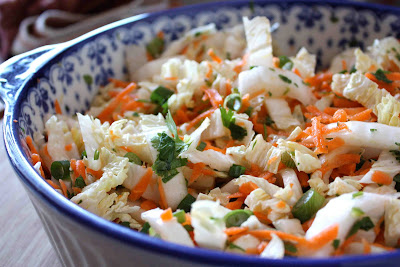 Separate the cabbage leaves into a large bowl. Add carrots, scallions, and cilantro, and toss well.

Pour the dressing into the cabbage mixture and toss again. Let stand for 10 minutes, tossing occasionally.