Naan bread pizza is favorite around here, and this Thai Veggie version (hello, peanut sauce!) knocks it out of the park with flavor. 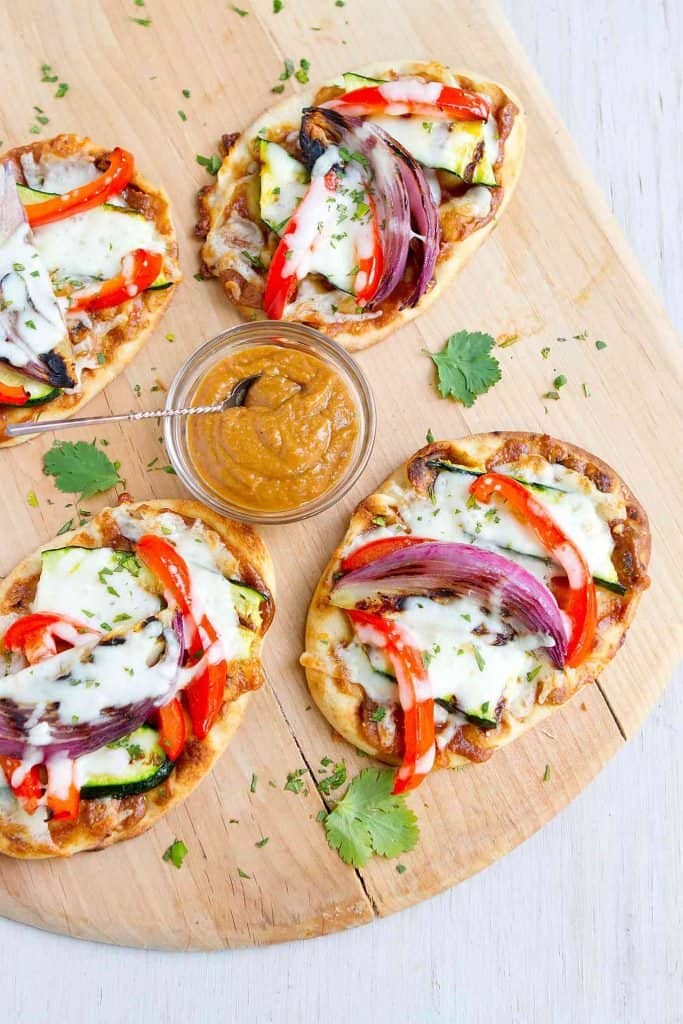 This Thai Veggie Naan Bread Pizza recipe is being added onto the most popular recipe list in our house – Thai-inspired recipes! Whether it’s this vegetarian naan pizza, a bowl of Thai Chicken Salad (a reader favorite, too) or my Vegan Thai Red Curry, my family is at the table in a flash, ready to dig in.

Pizza night has become somewhat of a tradition in our house. Typically it involves a batch of two of my whole wheat pizza dough and the toppings of choice for that night. But if I’m short on yeast, time or energy, naan bread saves the day!

We often buy the big pack of mini naans at Costco and stash them in the freezer to serve with curries, but using them for our favorite naan pizzas, such as Chicken Pesto Artichoke Naan Pizza, is a quick meal trick that I always have up my sleeve.

WHAT YOU NEED FOR THIS NAAN BREAD PIZZA RECIPE: 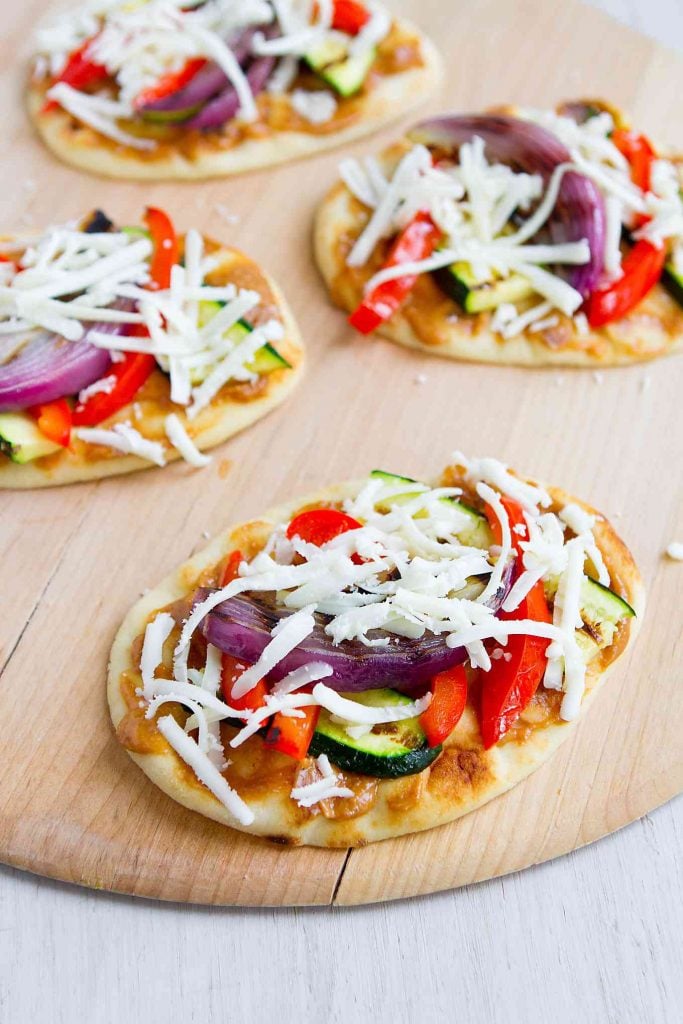 How to make naan bread pizza:

The beauty of using naan bread for pizza is that no rolling is required! To bake, you can either use a pizza baking stone (my preference for any kind of pizza) or a baking sheet, which works perfectly well for pizza on naan bread.

Spread the sauce on the pizza, layer on your preferred toppings, sprinkle the cheese on top and pop it in the oven.

Bake the pizzas at 425 degrees F for 7 to 8 minutes, or until the cheese is melted and the naan is golden brown on the edges. 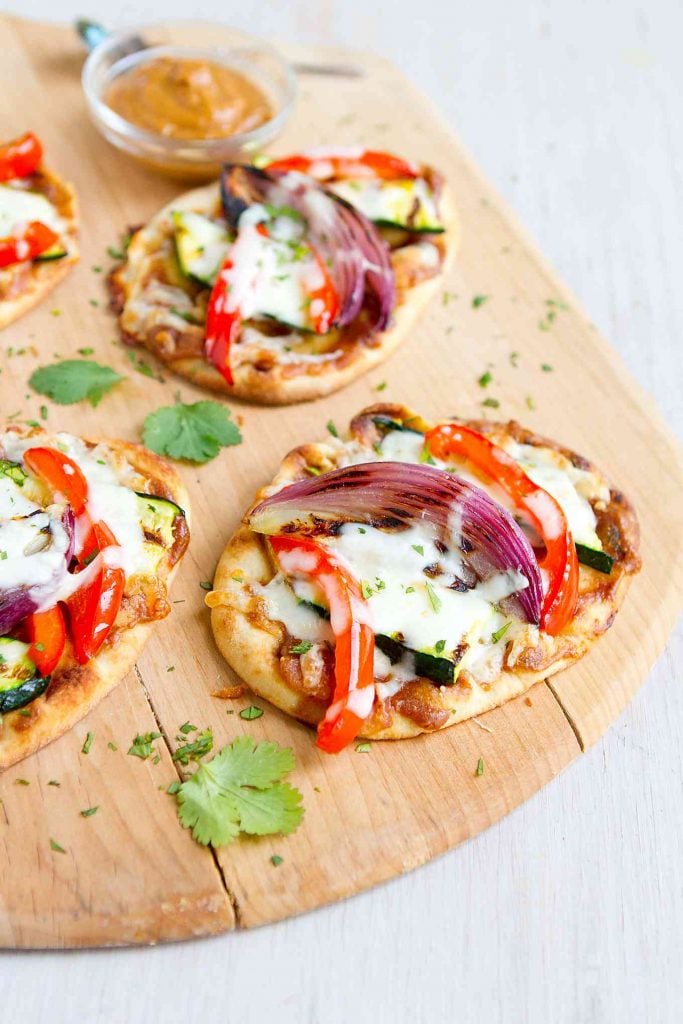 That completely depends on the toppings! For a healthier pizza, opt for lean meats or no meat at all, cut down on the cheese and pile on the veggies.

The peanut sauce used for these Thai Veggie Pizzas is higher in fat than a regular tomato-based pizza sauce, but just a dollop (2 teaspoons per pizza) is all you need to add a blast of flavor! 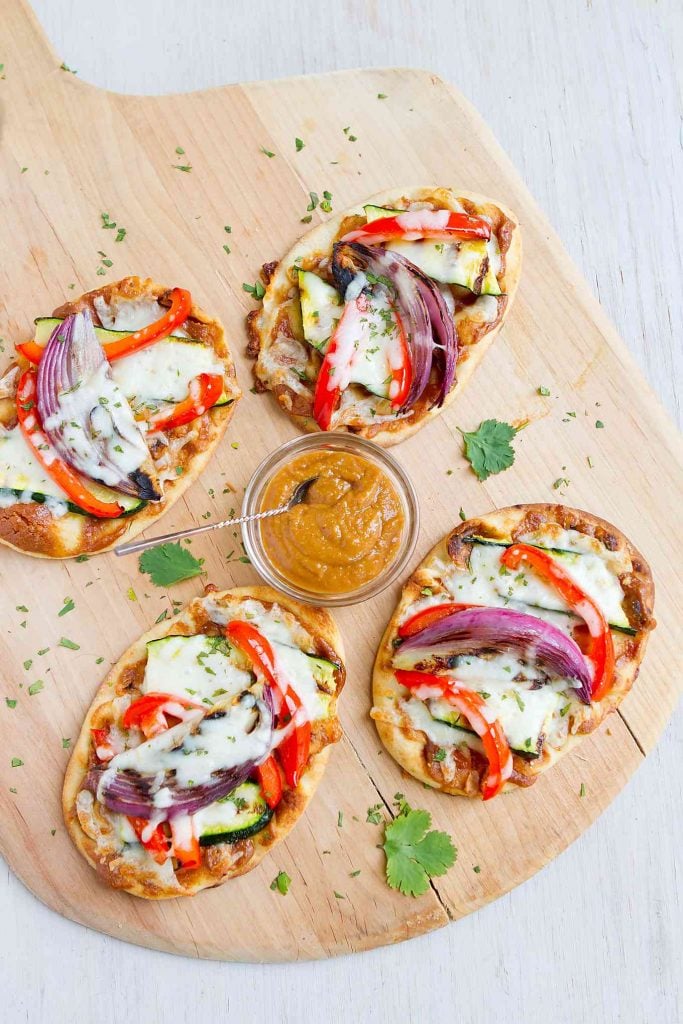 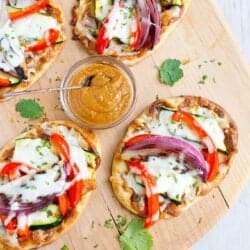