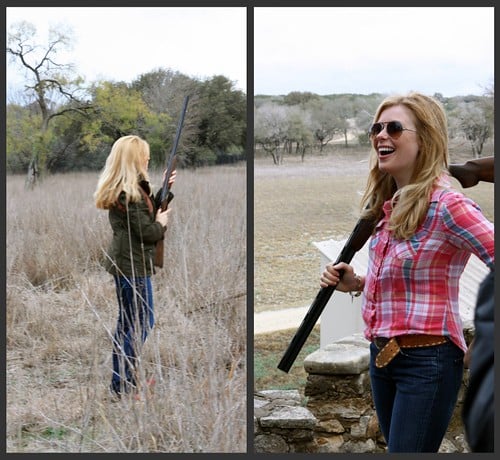 I'm not sure that Georgia Pellegrini, author of the book Girl Hunter: Revolutionizing the Way We Eat, One Hunt at a Time, would appreciate being likened to a young teenage boy, but I can't help compare her to Sam Gribley, the hero of one of my sons' favorite books, My Side of the Mountain. In 1959, Jean Craighead George crafted the character of Sam Gribley, a native New Yorker who was tired of living in a cramped apartment with his parents and multiple siblings. Armed with a few supplies, a headful of knowledge that would rival the most capable explorer's and an insatiable spirit for adventure, Sam heads to an abandoned hillside deep in the Catskill Mountains.

Sam spends the spring and summer learning to make flour out of acorns for pancakes, composing salads from the wild plants that most of us would mistake for weeds, and capturing and training a young peregrine, Frightful, who becomes his hunting partner and companion. As summer turns to fall, Sam is faced with a new set of challenges as he prepares shelter and clothing, and works diligently to prepare a food supply to last him through the harsh northern winter. I'll admit that I was just as engaged by Sam's adventures as my two sons. And I found myself asking, "Could I have made it out there alone? Could I do what Sam did?"

Fast-forward several decades to present day. The setting is Joshua Creek Ranch in the Hill Country of Texas, set amongst brush-covered hillsides dotted with quail and pheasants, doing their best to stay out of range of the avid hunters who descend upon this Beretta Trident-ranked hunting lodge (that's like the equivalent of Michelin stars for you food lovers out there). 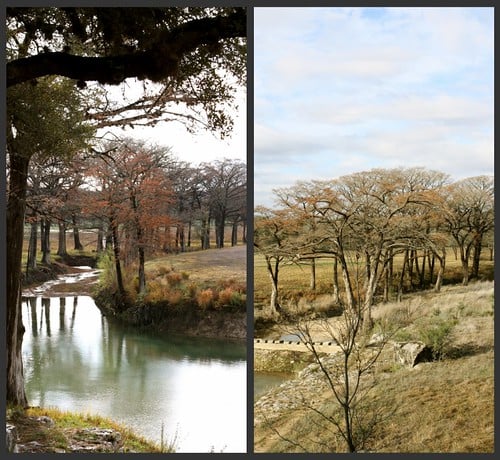 There we were, fourteen food bloggers, most of us had never touched a shotgun let alone thought of shooting a live animal with one. 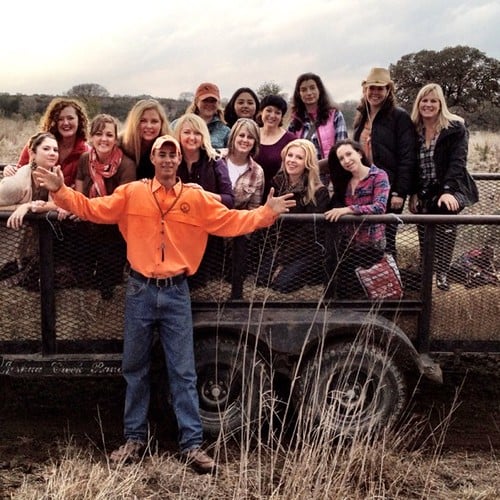 Photo courtesy of Angie of Bakerella
Left to right: Kristan of Confessions of a Cookbook Queen, Bridget of Bake at 350, Shelly of Cookies and Cups, Wendy of Wenderly, Angie of Bakerella, Amy of She Wears Many Hats, Cheryl of TidyMom (below), Erika of Ivory Hut (above), me (in the hat), Georgia of Georgia Pellegrini (below), Elana of Elana's Pantry (above), Marla of Family Fresh Cooking, Carrie of Deliciously Organic and Lori of Recipe Girl. Front and center: Eric of Joshua Creek Ranch

However, we were there for a weekend of bonding and to catch a glimpse inside the life of Georgia Pellegrini (aka our modern-day Sam Gribley). Some of the similarities between Georgia and Sam are quite striking. Georgia also grew up in the tri-state area, anxious to return to the solitude of her home in the Hudson Valley after a day at her Manhattan prep school. As a young girl, she foraged from the land and learned to appreciate the quiet and simplicity that nature provides.

After years of schooling, Georgia moved on to a job at Lehman Brothers in Manhattan, living a life that gave her financial stability, but left her wanting more. She followed her passion for food and enrolled in the French Culinary Institute which led her to stints in restaurants in New York and France. In her new book, Girl Hunter: Revolutionizing the Way We Eat, One Hunt at a Time Georgia tells the story of killing a turkey with her own hands at the behest of the chef where she worked. Something stirred inside of her and she knew that she wanted to learn more about where her food came from and to be a part of the process of bringing the food to her plate. 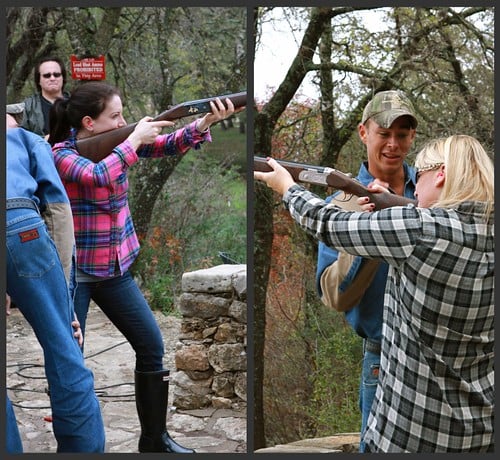 Marla of Family Fresh Cooking and Lori of Recipe Girl

I will admit that, before reading Georgia's book, I was not a fan of the whole hunting "thing". My thought was that hunters were just out there for the thrill of the kill. For some reason, I never made the connection between the many hours I spent fishing as a kid with my dad and later fly-fishing with my husband, and the intentions of many hunters. 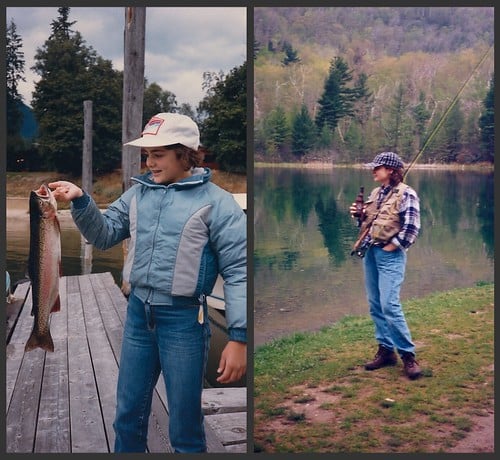 Heck, my husband and I even learned to fly Harris Hawks as the dogs flushed out birds in the bushes and the hawks swooped down to make the kill for their trainers. And yet, in my mind, I was still different from the hunters with guns.

Now I readily admit that this way of thinking came from a very ignorant place. Sure, there are hunters out there that dress up in camo and head out into the bush for the singular goal of finding a new trophy to hang over their fireplace. However, I now believe that most hunters have purer intentions. Yes, I'm sure they get a rush when the shotgun kicks back in their shoulder (I know I did when we were on the skeet shooting range). However, as I learned from reading Georgia's book and listening to the staff at Joshua Creek Ranch, many hunters have a much deeper understanding and respect for where their food comes from than those of us who pick our meat from the grocery store shelves.

Georgia's book tells the tale of her introduction and then full immersion into the world of hunting, her adventures along the way (not all of them easy), the characters she has befriended and her full circle back to the place she loved as a little girl, the place where humans and nature can co-exist in a mutually respectful way. Much like Sam Gribley. 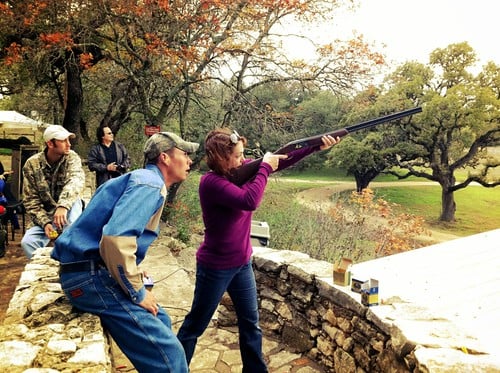 My turn on the skeet shooting range. Photo courtesy of Cheryl of TidyMom

Check out this amazing video for Georgia's book, made by the talented team of Diane Cu and Todd Porter of White on Rice Couple.