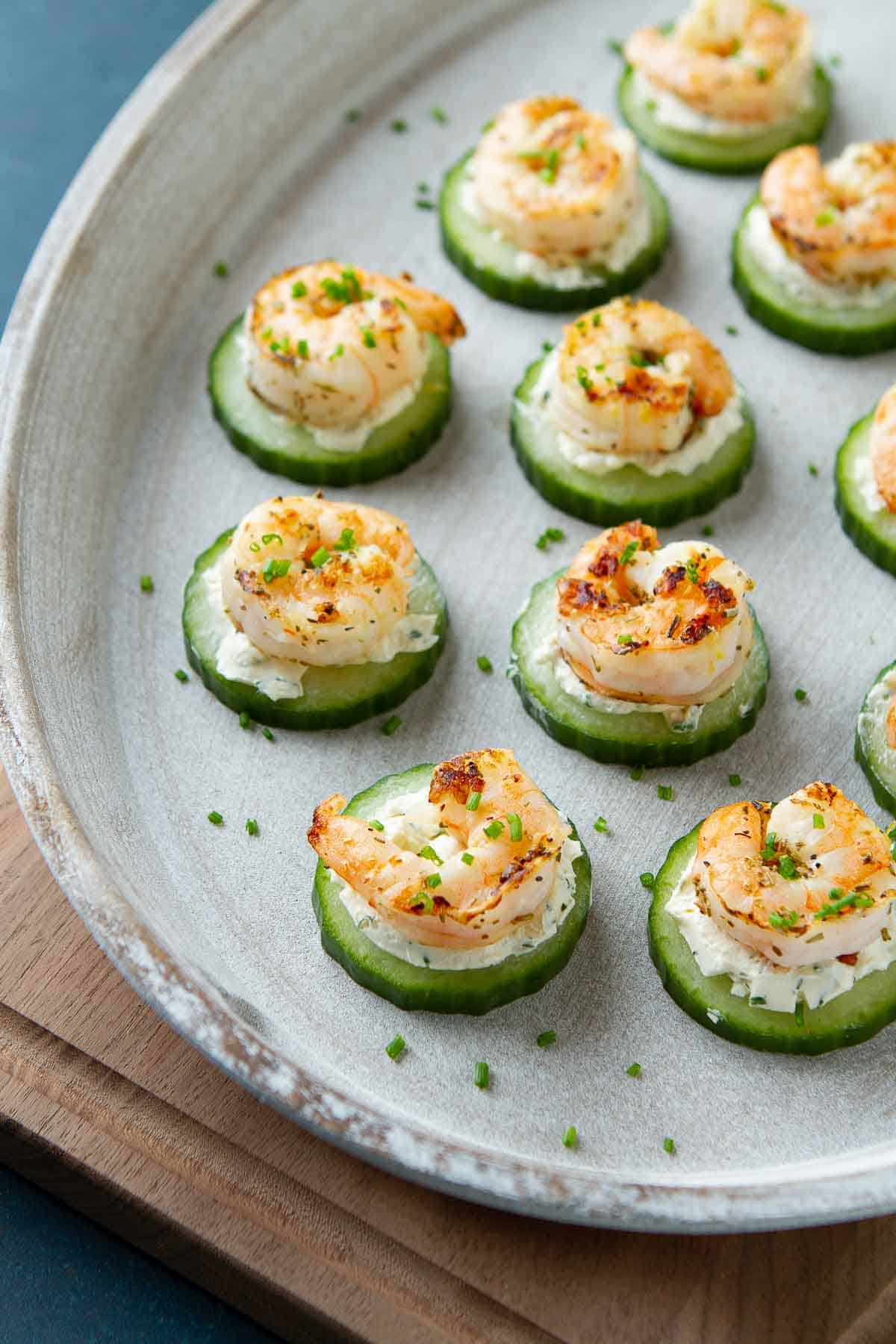 You won't be able to stop eating these easy Cucumber Shrimp Appetizers! Seared shrimp sit atop herb cream cheese and cucumber slices. Serve them up at your next holiday party or game day get-together.

Cucumber shrimp appetizers are the ultimate tasty, healthy and refreshing appetizer recipe for your next cocktail party or holiday gathering. bite-sized treats are not only delicious, but they are also easy to make and are sure to be a hit with your guests.

They are a fantastic option for a New Year's Eve party, served alongside a cranberry Prosecco cocktail or kamikaze cocktail or shot (hand over those car keys first!)

When it comes to making cucumber shrimp appetizers, the key is to use fresh, high-quality ingredients. Start by selecting firm, crisp cucumbers and fresh, plump shrimp. You will also want to make sure to whip the cream cheese, as it is much easier to spread than regular cream cheese.

Once your cucumber shrimp appetizers are assembled, you can either serve them immediately or chill them in the refrigerator until ready to serve. They are best enjoyed within a few hours of being made, as the cucumbers will begin to lose their crispness over time.

KEEP IN TOUCH
and receive recipes straight to your inbox!

How to make the best cucumber shrimp appetizers:

PAT DRY: Remove any shells and tails from the shrimp. Pat them dry with a paper towel. You want to dry the shrimp for two purposes: 1) It helps the olive oil and spices adhere to the shrimp and 2) It allows the shrimp to sear (and brown!) rather than steaming in the skillet.

SEASON THE SHRIMP: Toss the shrimp with the olive oil, rosemary, garlic powder, salt and lemon zest until coated.

COOK THE SHRIMP: I suggest using either a nonstick skillet or an enamaled cast iron for cooking the shrimp, If using a stainless steel skillet, use additional olive oil to stop the shrimp from sticking to the pan.

Heat the skillet over medium-high heat. Sear for about 1 minute per side. The shrimp should be just cooked through. Take care not to overcook the shrimp, which causes it to be rubbery.

Transfer the shrimp to a plate and cool to room temperature. Speed this up by popping the shrimp into the refrigerator.

WHIP THE CHEESE: Place the Neufchâtel or cream cheese in a large bowl. Use a hand mixer to whip the cheese until it’s light and fluffy. Start the mixer on low so the cheese doesn’t splatter out of the bowl (spoken from experience). It should take 2 to 3 minutes to get the cheese to a light and fluffy stage.

Add the minced dill and chives, and quickly whip to combine.

ASSEMBLE: Start by spreading one teaspoon of the cheese mixture on each cucumber slice. Either a butter knife or offset spatula work well for this.

Top each cucumber bite with a shrimp and sprinkle the appetizers with the remaining minced chives.

SERVE: Serve the cucumber appetizers right way or cover with plastic wrap and refrigerate for up to 3 hours.

Can I make these appetizers ahead of time?

While you can assemble the cucumber shrimp appetizers ahead of time, it is best to serve them within a few hours of being made to ensure that the cucumbers retain their crispness. They tend to “weep” if left for too long.

If you need to make them in advance, it is a good idea to store the assembled appetizers in the refrigerator and then let them sit at room temperature for a few minutes before serving.

You can use regular cream cheese in these appetizers, but it may be more difficult to spread on the cucumber rounds and may not give the appetizers the same light and fluffy texture as whipped cream cheese. Or you can swap Greek yogurt for the cream cheese.

Can I add other ingredients to these appetizers?

Cucumber shrimp appetizers are incredibly versatile and can be customized to suit your taste. In addition to dill and chives, you can also try adding other herbs such as parsley or basil. or seasoning the shrimp with paprika and black pepper. You can also try adding other ingredients such as avocado or swapping smoked salmon for the shrimp, like I do in these appetizers. 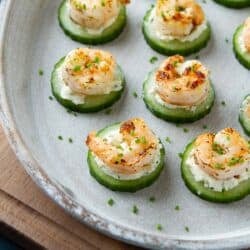 Note 1: Large shrimp are often labeled as 31-35 (meaning there are 31-35 shrimp per pound). Use peeled, raw shrimp without the tails. Note 2: Neufchâtel is often sold with the cream cheese in most grocery stores. Alternatively, you can use ⅓-less fat cream cheese. Please note that I am not a medical or nutritional professional. I provide nutritional information for my recipes as a courtesy to my readers. It is calculated using the LoseIt! calculator. While I attempt to provide information that is as accurate as possible, you should calculate the nutritional information independently before relying on it.