Have you always wondered how to carve a turkey for that perfect Thanksgiving display? Follow these easy step-by-step photos to make it easy! 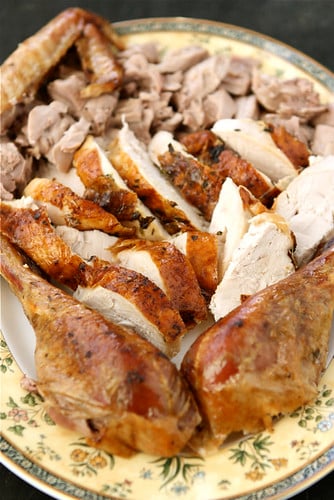 How to Carve a Turkey

In my family, carving turkey is inexplicably linked to the host’s manhood. I don’t know how it started, but it was a topic of conversation at every holiday meal. It was determined by my paternal grandfather, and maybe even his father before him, that the proper way to carve a turkey was at the holiday table, in front of all the guests…in the seated position. I distinctly remember the time that my father dared to stand up while carving. Oh, did he receive an earful from my grandfather and I’m certain he was told he was not fit to carry on the family name if he continued in that manner. He promptly sat down to complete his holiday duty.

The funny thing was that my grandfather was a jokester, the one that always told me to look at some nonexistent point of interest in the other direction while he snuck a forkful of my dessert, his eyes sparkling with laughter when I realized I’d been duped. Turkey carving, however, was not a joking matter.

My husband was released from this family “tradition” when I decided that it was a heck of a lot less messy to carve the turkey in the kitchen and lay the carved meat on a platter to be presented at the table. While I’m sure he would have passed the carving test with flying colors, after some pre-feast coaching, he has managed to keep his manhood intact without being subjected to this strange family test. 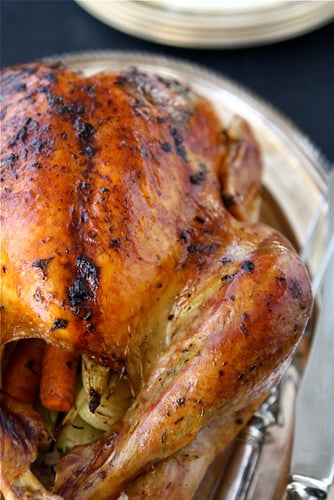 Over the years of hosting Thanksgiving and Christmas at our house, I have hacked my way through a number of turkeys, carving so that the bird looks like it has been through a massacre. I knew there had to be an easier way and finally figured out how to cleanly remove the legs from the body, and cut the breasts into attractive slices, each with a bit of golden brown skin attached. Of course, you might have a method that works for you, but I have found this to be the easiest method.

How to carve a turkey:

To remove the leg from the turkey, hold the drumstick and gently pull it away from the body. Insert your knife between the leg and body of the turkey. Cut through the joint and skin that connects the leg to the body and remove the leg. Repeat with other leg. 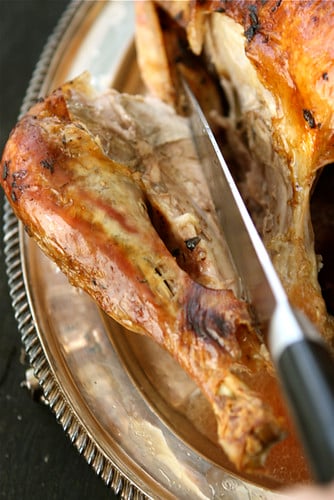 Separate the drumstick from the thigh by cutting through the joint and skin. 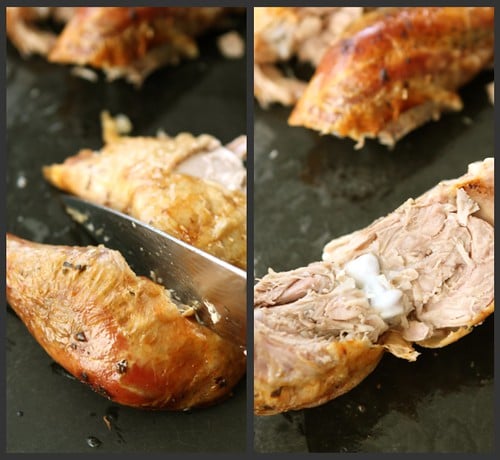 Turn the thigh so it is lying on the cutting board skin-side down. Using your fingers, located the bone. Use the tip of your knife the cut around the bone and remove it with your fingers.

Cut the thigh crosswise into about 1/2 to 3/4-inch pieces. Place the drumsticks and sliced thigh pieces on the serving platter.

With your hands, pull the wings away from the turkey until they separate from the body. Place on platter. 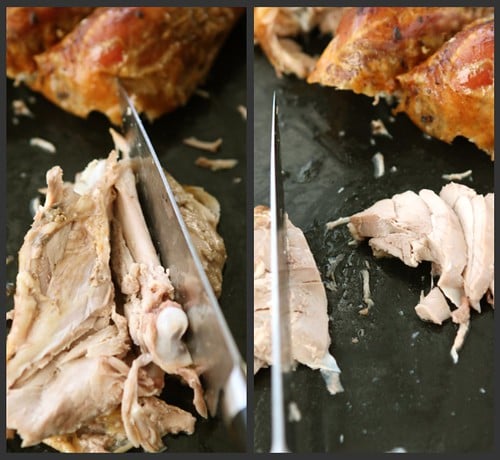 There are two schools of thought for slicing the breast. Both make lovely presentations and both result in tender, satisfying slices of turkey. The first method, which is not shown here, involves slicing the breast meat with the breast still on the turkey. Start at the part of the breast that is furthest from the backbone and cut thin slices, moving towards the breastbone with each slice.

The second method, shown here, involves removing the breasts entirely from the bird, then slicing.

Using your fingers, locate the breastbone of the turkey. Insert your knife on one side of the bone, between the bone and breast. Cut down until the knife hits the bone.

Next, angle the blade of the knife away from the breastbone and slice underneath the breast, alongside the rib cage until the breast meat separates from the turkey. 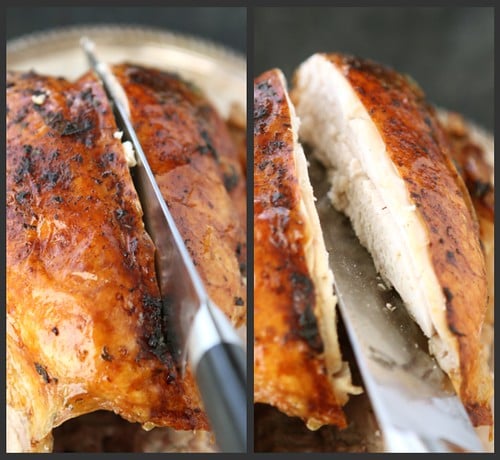 Place the breast meat on the cutting board and cut into 1/2 to 3/4-inch slices, across the grain.

Arrange the breast meat on the platter. Serve with gravy (see How to Make Turkey Gravy: Recipe & Troubleshooting). 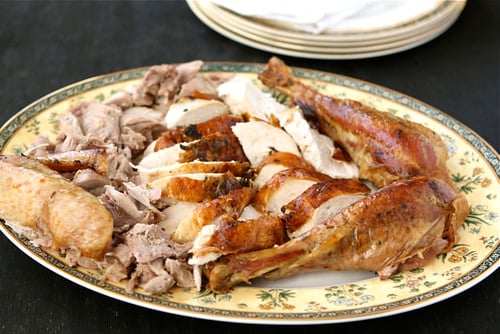 Happy Holidays to all!

The post was originally published on November 21st, 2011. Photos and the text have been updated.

Don’t miss out on new recipes!