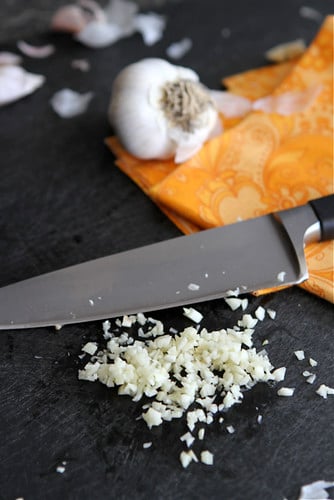 Looking back on my first attempts at cooking, I am surprised that I was able to put something even remotely edible on the table, considering how little I actually knew. Peeling and mincing garlic was definitely one of those things that tripped me up. I’d resort to my old, clunky metal garlic press. It would mince that garlic relatively well, but then I’d have to spend the next 10 minutes cleaning the darn thing. Of course, I could have resorted to the pre-minced bottled garlic. Hmmm…

A couple of weeks ago, an acquaintance asked me if I used the bottled garlic. I’m certain that the horrified look that crossed my face completely offended her. Don’t get me wrong; I know that scooping out a dollop of pre-minced garlic makes meal prep more efficient. However, the minute of time that I save is not worth the compromise in taste. I promise that peeling and mincing fresh garlic will take you no more than a minute or two, especially when you get the hang of it. I figured this was the perfect topic for the next installment in my “How to” series.

Before I move onto the “how to”, I wanted to share a cooking segment I did this week on the local KUTV 2 News. I made one of my favorite lunch dishes, Salad Cups with Quinoa, Shrimp, Avocado & Lemon Dressing. Just click on the picture below to see the segment.

Just a heads-up – right before the segment, there was a story on the benefits of using olive oil on your hands to moisturize your skin. This will make sense once you watch the segment. It was kind of a funny moment.

How to do it:
The first thing you want to do is remove the papery skin from the outside of the garlic clove. When I first starting cooking, I tried to do this in a variety of ways – peeling with a small knife, pulling at the skin with my fingers and using those rubber rolling tubes. All left me frustrated and, inevitably, with little pieces of papery skin sticking like glue to my fingers.

The easiest way to remove that papery skin is by smashing it off. That’s right, this is where you get to release all of those pent-up aggressions from the day.

Place the clove underneath the heel end of the blade of a chef’s knife and pound on the smooth surface of the blade with your fist. It should just take one or two pounds to do the trick. This will not work with a small paring knife, so be sure to pull out your chef’s knife for this job.

Now use your fingers to completely remove the skin. 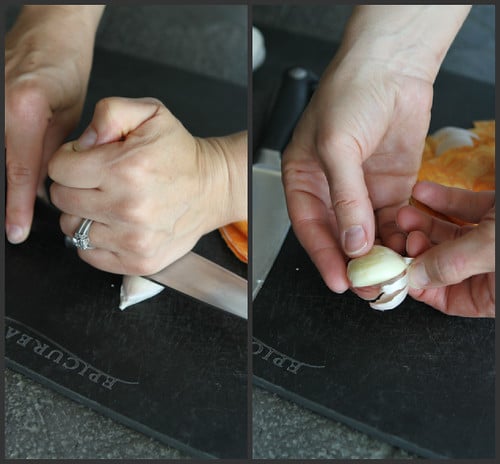 Now that the papery skin is gone, it’s time to start slicing and dicing. This process is virtually identical to the technique I showed in How to: Chop an Onion.

First, carefully make a horizontal slice through the clove. Watch those fingers!

Next, cut several parallel slices from the root end of the clove (where the woody stem is located) to the tip of the clove.

Finally, cut across the clove in the opposite direction to make small diced pieces. 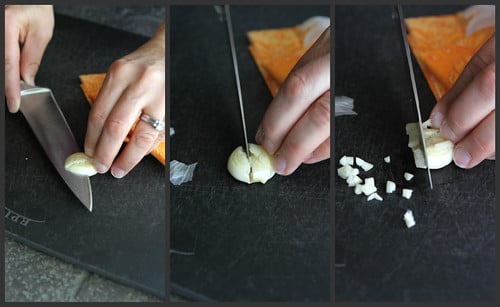 That’s it! A perfectly minced clove of garlic in a matter of seconds. 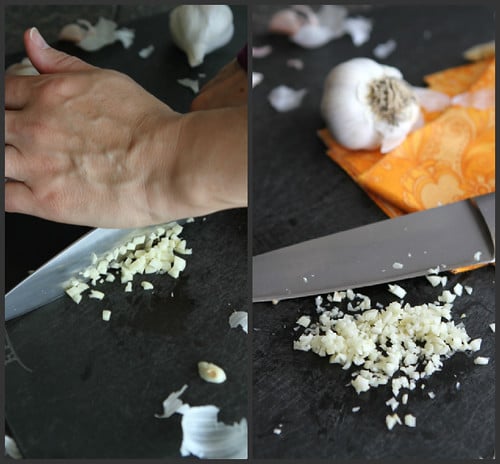 Don’t miss out on new recipes!