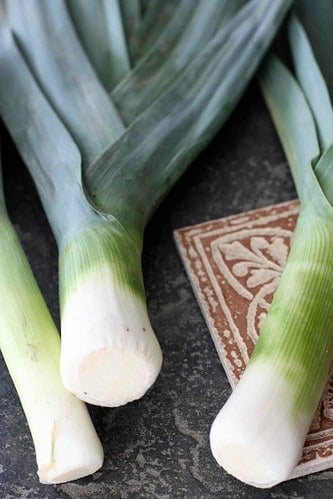 Over the past months, several people mentioned to me that they often see leeks in the supermarket, but never buy them because they do not know how to prepare the onion-like vegetable. The leek, a vegetable that is part of the allium family, has a milder flavor than its two cousins, the onion and garlic. The dark green leaves, which grow above ground, are inedible due to its tough texture and lack of flavor, though they can be reserved for use in a bouquet garni. All of the flavor is found in the white and light green layers of the cylindrical bottom half of the vegetable.

Although it is a seemingly complicated vegetable, there is really nothing more to preparing a leek than a little washing and cutting. Leeks grow layer by layer, trapping dirt as each new fold is added. Therefore, it is necessary to get between the layers to rinse out the dirt and grit before slicing or julienning the leek. This is done by simply cutting the vegetable in half lengthwise and rinsing it under water, gently pulling aside the layers to access the dirt.

Leeks are versatile vegetables and the mild flavor enables them to pair with a variety of flavors. Cut in half or quarters, leeks can be left long and braised with fresh herbs. When cut or julienned, they can be used as a base for dishes such as soup or quiche.

How to prepare leeks:

Wash the outside of the leeks to remove any dirt. Cut off the dark green leaves. Cut at an angle to retain as much of the light green part of the leek as possible (left).

Cut the leek in half lengthwise, keeping the root intact (right). 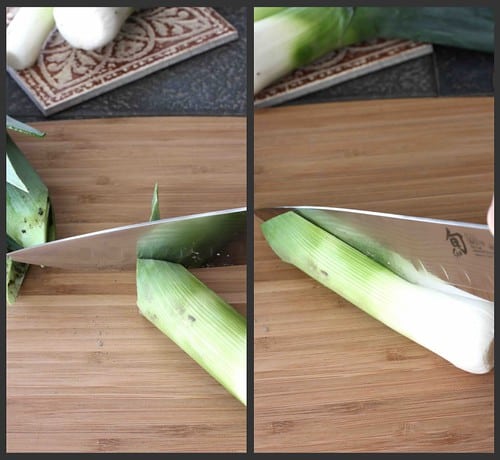 Cleaning the leeks can be done one of two ways. You can either rinse the leek under running water, separating the folds to remove any dirt (as shown), or the leek can be soaked in a bowl of cold water for about 30 minutes. 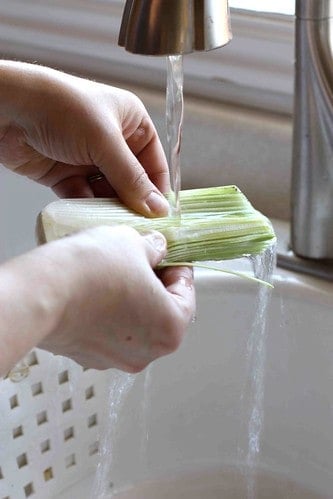 The leeks may be used in this form, particularly if you wish to braise them. Alternatively, they can be sliced crosswise (left) or julienned (right) for use in dishes such as quiche or soup. 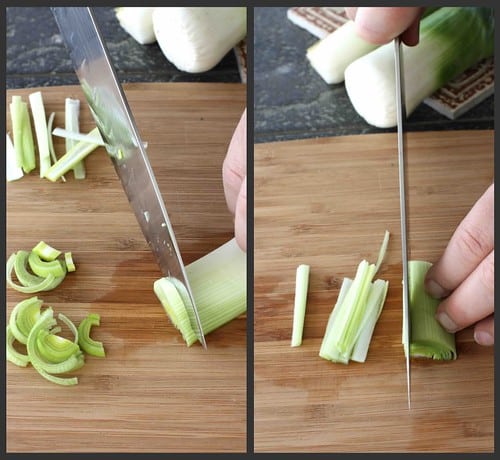