Let's be real...running uphill isn't easy. But here are some tips and tricks for how to run uphill that will make you a more efficient runner.

There is no such thing as an easy uphill run, as least not in my world. However, I have come to appreciate the hills, in a "make me stronger", "I am woman, hear me roar" kind of way.

It hasn't always been that way, of course. When I first started running, I avoided hills like the plague, planning my route so that I would run in the most circuitous ways through the neighborhood to avoid even the smallest incline. I was already huffing and puffing. Why make things harder?

Living in hilly Utah, there are only so many ways you can run without coming upon a hill. I ran the same darn route so many times that I thought I was going to lose my mind or, worse yet, become so bored that I wouldn't want to run anymore. 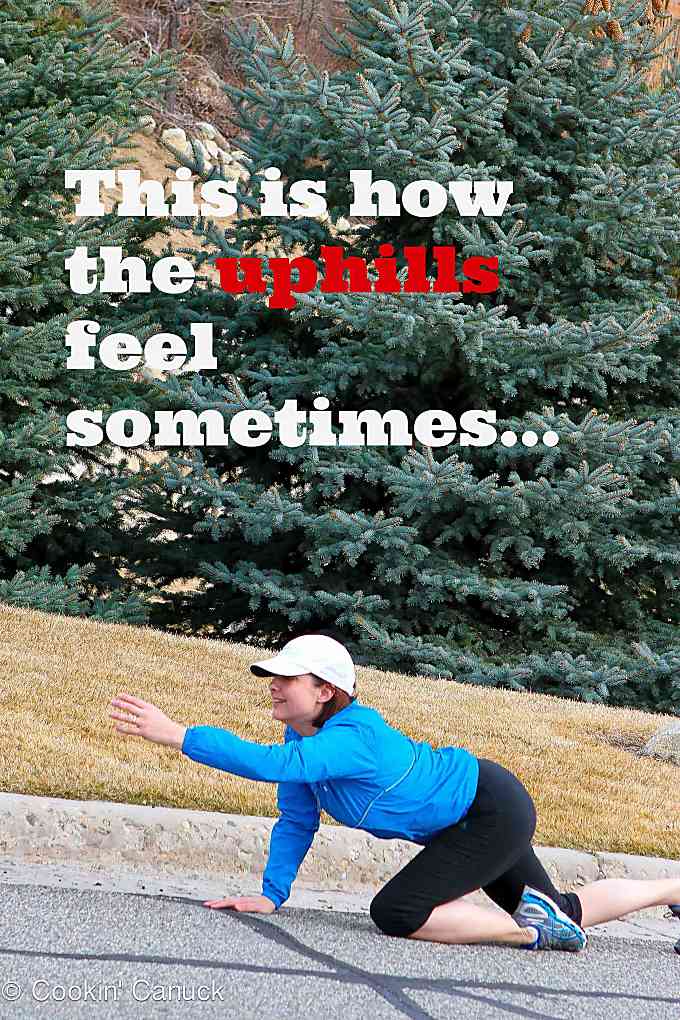 It was time to take on the hills. But besides doing my best to not to keel over before reaching the top, how should I do it?

How to Run Uphill

Keep your eyes up

I know how tempting it is to look down at your feet, trying to ignore the existence of the hill. "If I don't look at it, it won't be real."

Unfortunately, this ostrich-with-its-head-in-the-sand approach is doing you more harm than good.

If your eyes are looking down, it's likely that your shoulders are slumped which, in turn, means that your lungs don't have the ability to expand all the way to let in enough oxygen. And believe me, you'll need oxygen to make it to the top!

For me, looking up also adds a psychological component of strength. I want to show that hill who's boss and I can only do that if I'm looking it in the eye, so to speak. Look straight ahead and take it on!

Standing tall while running uphill puts your glutes into action. Those muscles are the driving force in powering you to the top of the hill. Leaning forward too much takes some of the power away from the glutes, putting more emphasis on the hamstrings.

I actually try to imagine a jackrabbit-type power coming from springing off of my toes and pushing through my glutes.

Someone once told me that my legs will follow along with my arms. I thought that sounded crazy at first, but then I started to pay attention to my arm swing, particularly when going through a tough patch during a run. When I concentrated on moving my arms more, everything with my legs seemed to come easily.

Concentrate on this as you're running up the hill. Pump your arms. Don't go overboard...you don't want to do a speed-walking impersonation that may cause you to swivel your hips. But pump them enough to encourage your legs to keep moving.

If you have any other tips and tricks for running uphill, please share them in the comments section.

If you missed the last couple of Run Like a Girl posts, be sure to check them out. Cindy (our resident running coach) shares her thoughts on focusing on the process, while I outline some ideas for what to eat before a run.

Have a great running week!