Dump & go! This Slow Cooker Vegetable Barley Soup recipe couldn’t be easier. Just throw everything in the crockpot and walk away! Healthy, delicious and packed with nutrients.

This slow cooker vegetable barley soup saved me on more than one occasion. I’ve lost count of how many times we’ve sat on the sidelines of my son’s soccer game on windy, blustery days. We barely noticed the weather while the game is on – cheering and living vicariously through every kick, pass and tackle will do that. But once we’re on our way home, all I can think of is a hot bowl of soup.

Truth be told, any of our favorite soup recipes would do. My son would vote for his favorite Pesto Turkey Tortellini Soup and my husband would opt for something like my Chicken and Rice Soup (Instant Pot).

But there is something really appealing about throwing all of the ingredients into a crockpot before the game and coming home to a piping hot, ALREADY COOKED batch of soup. Just serve and eat!

And as an extra bonus, this soup ranks high on the nutrition scale. It’s high in fiber and is plant based, not to mention packed with flavor thanks to the vegetables, herbs and spices.

▪️ SO EASY! After chopping the vegetables, just dump everything into your crockpot, along with some barley and broth. Set to LOW and let the slow cooker do its thing!
▪️ PLANT-BASED: This veggie-packed soup happens to be plant-based and vegan. It's packed with fiber (about 9 grams per servings) and nutrients.
▪️ VERSATILE: This soup is incredibly versatile. Switch up the veggies to suit your tastes or what you have on hand. Or swap the barley for another whole grain, such as brown rice or farro.

SLOW COOKER: There are plenty of crockpots available in the stores and online. I like to use a digital programmable crockpot, like this one. The 8-quart capacity means you can make plenty of soup!

KEEP IN TOUCH
and receive recipes straight to your inbox!

How to make crockpot vegetable soup:

You have to love when recipe instructions are only three steps long! Making vegetable soup in a crockpot is truly one of the easiest recipes you’ll ever prepare. There is a bit of chopping, but from there it’s all hands-off prep time.

PREP THE VEGGIES: Start by chopping the onion, carrots, celery and sweet potato, and mincing the garlic.

COMBINE AND COOK: Dump everything (except for the parsley) into the slow cooker. Vegetables, canned tomatoes, barley, broth and seasoning. Set the slow cooker to LOW (a nice gentle simmer), cover and cook for 8 hours, or until the barley is tender.

GARNISH AND SERVE: Last steps…stir in the parsley, taste for seasoning (and adjust as needed) and serve it up!

What to serve with this vegetable barley soup recipe:

If I’m eating this soup for a light lunch, I’ll typically serve it alongside some whole grain crackers and hummus for an added boost of protein.

You could also add beans (still vegan) shredded rotisserie chicken (not vegan) to make a more hearty dinnertime meal for your family.

Can I use quick cooking barley in this soup?

Pearl barley take significantly longer to cook than quick-cooking barley, so one is not easily swapped for the other in most recipes. If you only have the quick cooking variety, cook it separately in a pot, drain it, then stir it in the finished soup.

Unfortunately, it isn’t. Brown rice or quinoa would be good substitutes in this recipe. If you prefer to add gluten-free pasta, turn the slow cooker heat to HIGH in the last 30 minutes of cooking and stir in the pasta.

What kind of vegetables are in a vegetable barley soup?

The beauty of a crockpot vegetable soup like this is that you can throw almost any vegetable into the mix, substituting your favorites for any of the ingredients listed. Use what's already in your fridge or freezer - frozen vegetables are great for slow cooker soups - so that you don't have to make a separate trip to the store.

I used sweet potato, carrots, onion, frozen green beans, celery and canned tomatoes, along with a scoop of pearl barley. If some of those ingredients don’t float your boat, feel free to make substitutions, such as broccoli, green peas, cabbage or zucchini.

Can I freeze barley soup?

Nothing makes me happier than when soup freezes well. It means we can eat our fill, then have enough for future meals. This recipe makes a ton of soup (11 cups) and is ideal for freezing.

Allow the soup to cool, then transfer it to a freezer safe airtight container (or multiple container, depending on how much soup is leftover), such as these glass ones. Freeze the soup for up to 3 months.

When ready to eat, defrost the soup in the refrigerator, then gently reheat it on the stove or in the microwave. 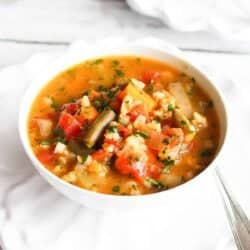