Have you heard of tourtière, a traditional spiced meat pie from Quebec? This version is lightened up with phyllo dough, and just as delicious! Thank you to Athens Foods for helping me share this recipe with you. 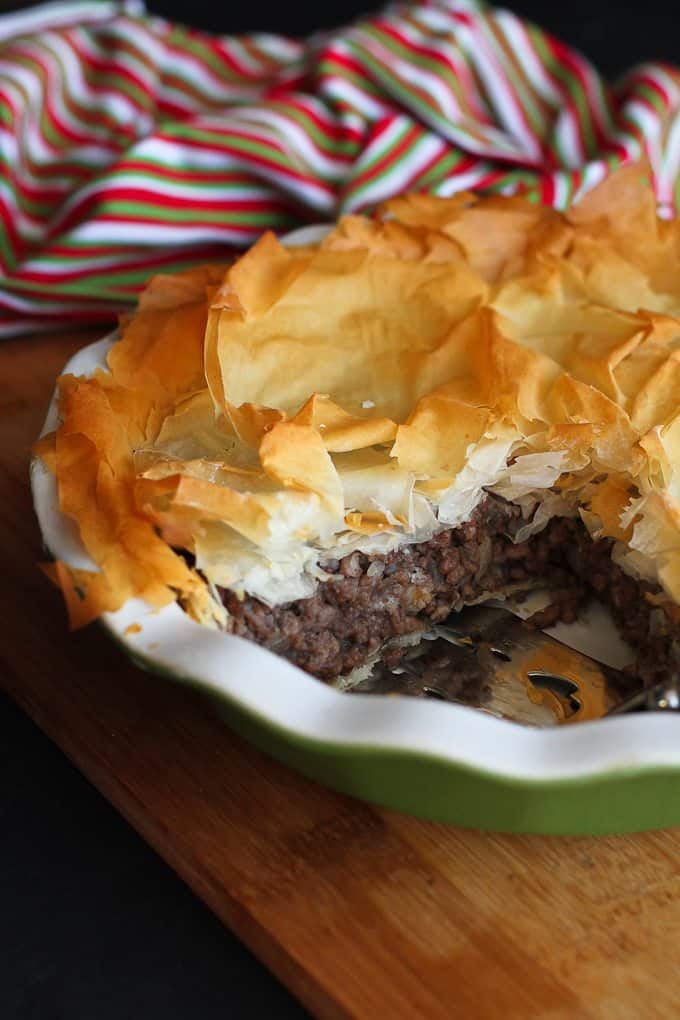 When people ask me what I would consider to be traditional Canadian recipes, I tell them about poutine and butter tarts, but often forget to mention tourtière, a spiced meat pie that heralds from the province of Quebec, but is enjoyed all over Canada, particularly at Christmastime. As with traditional recipes of many countries, there are as many versions of this recipe as there are cooks in Canada.

I'll admit right off the bat that I broke a cardinal rule of tourtière-making by substituting the traditional pastry with phyllo dough. This is a risky move that will likely result in several angry emails from Canadian readers, but I have my reasons. Number 1 - pie dough is my nemesis. Someday I will get past this, but today is not the day. Number 2 - I wanted to lighten up the tourtière, which was easily accomplished by using phyllo dough. I beg forgiveness of my fellow Canadians. 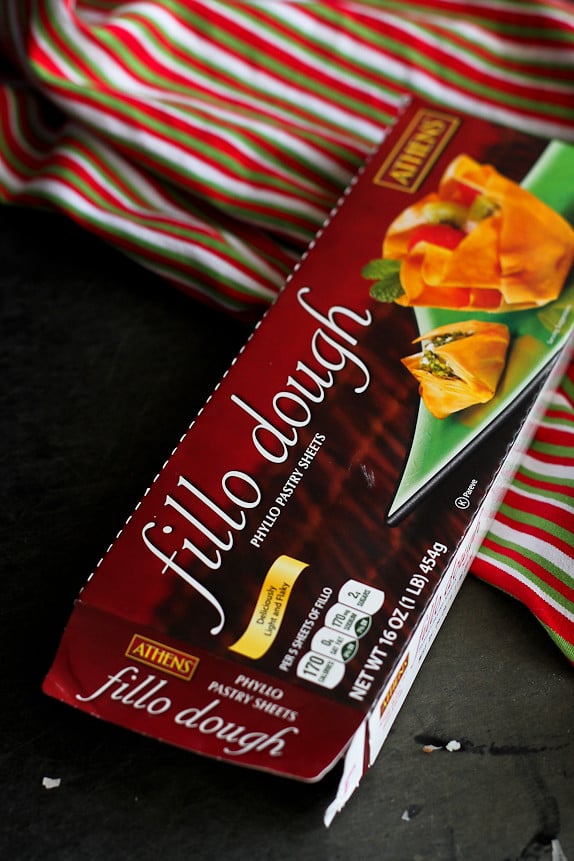 Truth be told, phyllo dough is something that I always have in my freezer. My favorite Athens Fillo Dough can be found in the freezer section of the grocery store, and it's great to have on hand for pies, tarts and appetizer turnovers. For this recipe, I took one package of the dough out of the freezer the night before so that it was ready to use when it came time to assemble the pie. 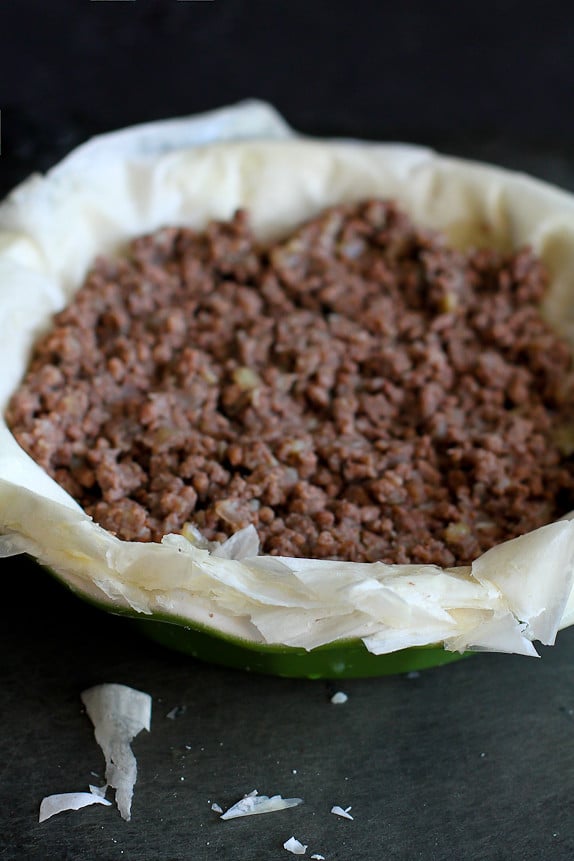 The majority of tourtière recipes call for ground pork, but many cooks like to use a mixture of pork, beef and venison. I stuck with ground pork, and was really happy with the flavor. The key to the flavor and texture of the meat, in my opinion, is two-fold. First, simmering the pork in a liquid (I used a mixture of beef broth and red wine) helps to retain the moisture of the meat while adding flavor. Second, the spices are key. I used ground cloves, ground allspice and cinnamon, though some cooks like to add savory as well. The spices are as diverse as the thickeners - mashed potatoes, oats or breadcrumbs.

You see what I mean by the variations of tourtière recipes? But really, when push comes to shove, you can't beat the flavors of spiced meat, all wrapped up in a crust of some sort. 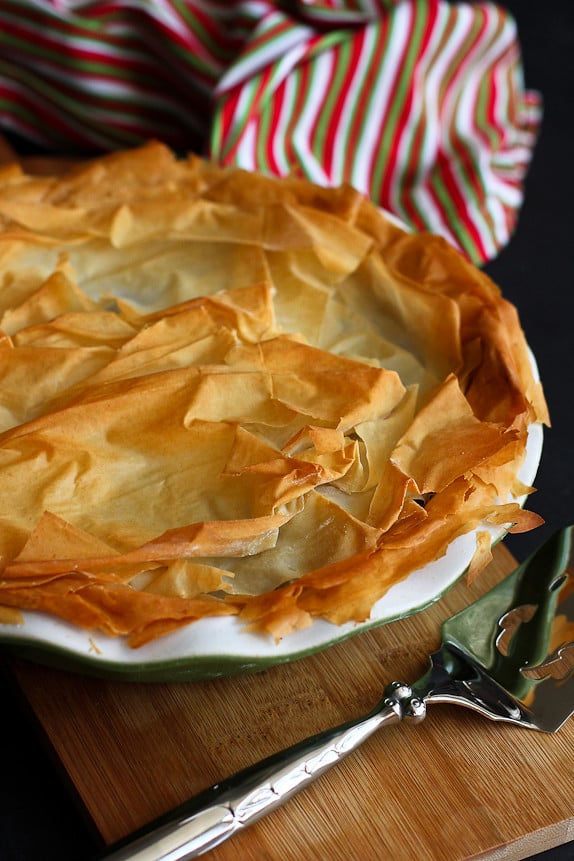 When working with phyllo dough, be sure to keep the extra phyllo sheets covered with a damp towel so that they don't dry out. It's standard practice to brush butter or oil on each sheet before layering on the next one. Instead, I used olive oil cooking spray to keep things light.

Other recipes with phyllo dough or mini phyllo shells: 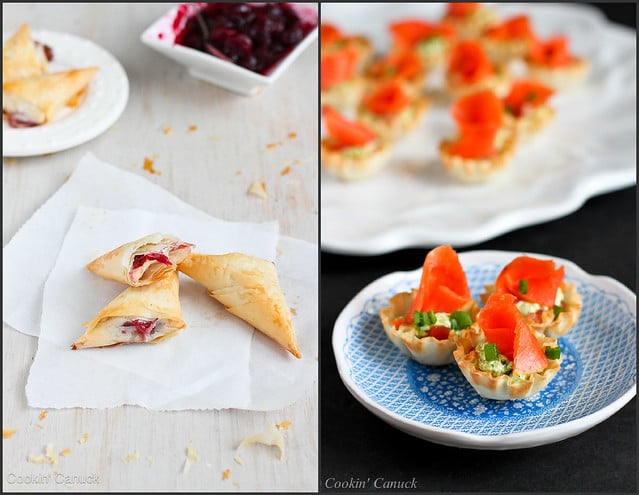 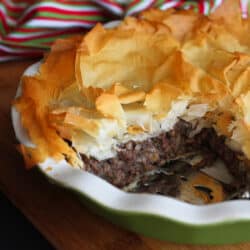 Disclosure: This post was sponsored by Athens Foods. All opinions are my own. This post contains links to my Amazon affiliate page. Any revenue made from sales through these links helps to support this blog. Thank you!