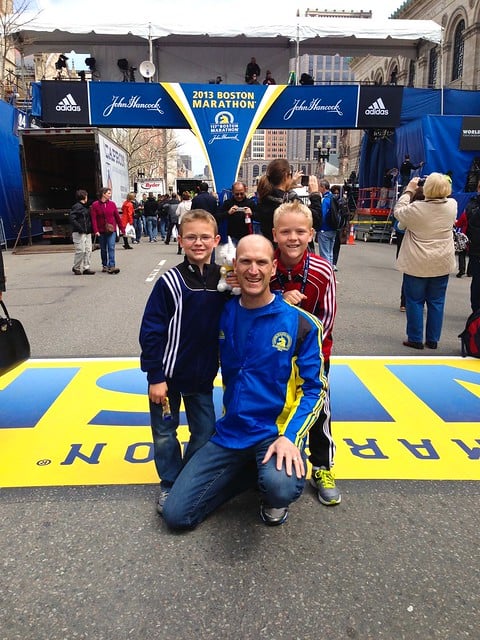 We went to Boston to celebrate. To celebrate months of long runs, sore muscles and pure determination, culminating in my husband's second running of the Boston Marathon, the 10-year anniversary of his first running of this storied and historic race.

What started as a joyful family vacation with my husband (Steve), our two sons and my husband's parents, turned into something completely different as soon as the first bomb went off near the finish line at 2:50pm ET. And as we enter into the stages of "the aftermath", we are left with a decision of how we define this experience, and how we let it define us.

The marathon day started like so many others have before this. My husband slipped out early to catch the bus to the starting line, clamboring aboard with fellow runners filled with nervous energy, munching on bagels and bananas, and sharing stories of qualifying races and previous Boston runs.

Steve's parents and I packed up the camping chairs, snacks and cameras and rounded up the boys for the short walk to the finish line. The streets were abuzz with activity, as volunteers worked to fill post-run snack bags for the runners and set up last-minute staging for the recovery area. Many of them were up for hours before the sun rose that morning, but the energy level was high. This was the Boston Marathon after all, one of the oldest races in the world, and everything needed to be just right. 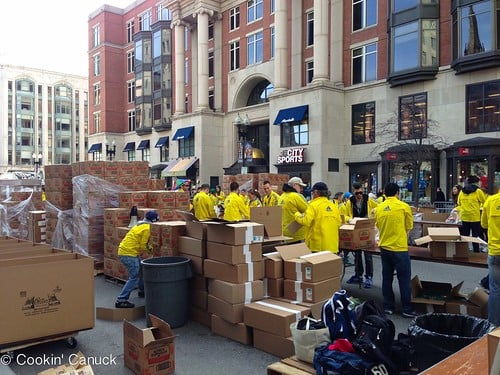 Runners work for years to try to qualify for the Boston Marathon, many falling short by mere seconds or minutes. Those that were running had crashed through personal barriers and fought tooth and nail to "BQ" (Boston Qualify).

We walked just past the Crate & Barrel storefront (an important location later that day) and set up our chairs. As is tradition for our family, the boys pulled out a package of Crayola markers and set to work making "Go Daddy Go" posters for their favorite runner. 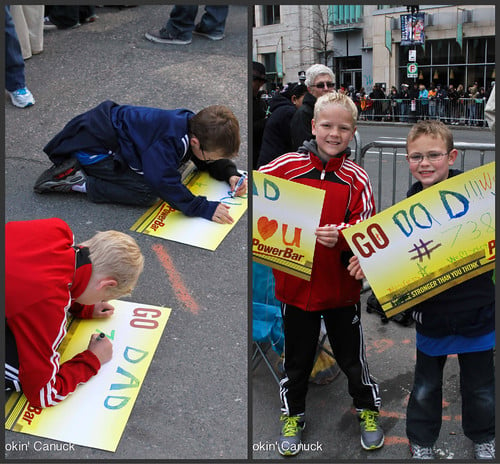 The hours ticked by and the streets started to fill in around us, spectators bustling to get the best view of the runners coming down the homestretch. In quick succession, we saw the first wheelchair athletes, and the winners of the men's and women's races fly by us with grace and speed. Understandably, the events of that day overshadowed the winners of the marathon this year, but I'd like to give acknowledgement to these amazing athletes. 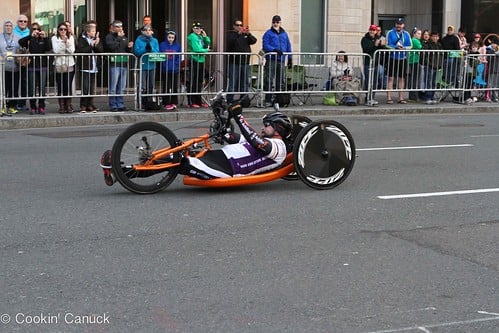 This is not the winner, but one of the first finishers. The winner of the men's race was Hiroyuki Yamamoto and the winner in the women's wheelchair race was Tatyana McFadden. 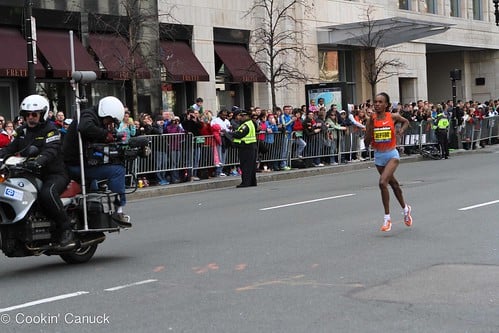 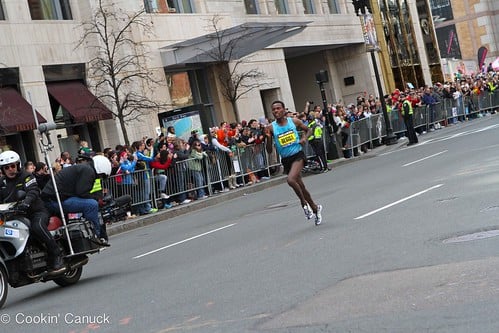 And then it was time to wait for my husband. We knew from our tracking app that he was a little off his desired pace, and we anxiously waited to see him come down the stretch. And then there he was, with that stride that I can recognize from a quarter of a mile away. As he neared us, he was running strong, but I could see the grimace of pain run across his face.

As usual, I teared up as he ran by us. I know how many hours of work went into the run, and how deeply he wished for a stellar finish for himself and for us. How proud we were! 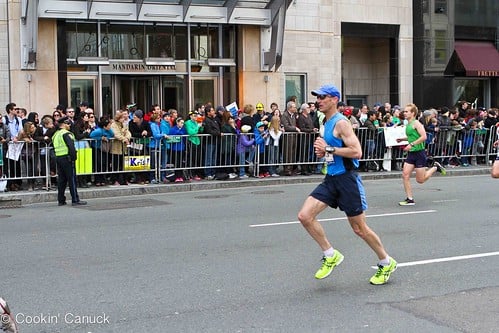 My father-in-law headed off with the boys to meet Steve in the family area, while Steve's mum and I settled in to wait for Cindy, my good friend and fellow Red Faced Runner (and amazing coach for my first marathon).

And then there she was, legs strong and eyes focused towards the finish line. I cheered myself hoarse! 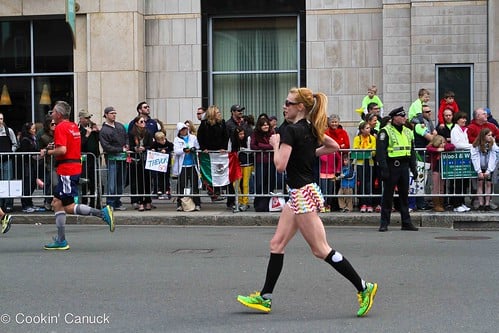 It was a time to celebrate.

We packed up our belongings and headed down Boylston Street, towards the finish line and our hotel.

The Moment It All Changed

As we walked past the country flags flying proudly to the side of the finish line, the cheers were deafening. Every part of the sidewalk was packed with mothers, fathers, children and friends shouting the names of their loved ones as the runners stepped across the blue and yellow finish line and on to eager volunteers ready to drape a medal around each of their necks.

We revelled in the euphoria of the scene, marveled at the runners who were staggering towards the cups of Gatorade lined up in endless rows on the tables, trying to hold off the inevitable leg cramps for just a few more minutes.

We were no more than a block past the finish line when we heard it. Or maybe we felt it.

A thunderous sound that shook the ground and caused us to suck in our collective breath.

We turned around to see an enormous grey cloud of smoke billow into the sky. Right beside the finish line. Right where we walked just a few minutes before.

Silence and confusion. And muttering. "What was that?" "It could have been a transformer blowing." "Was that a cannon?"

And then came the second blast, further down the street. Just two storefronts down from the Crate and Barrel and mere steps from where we had been sitting for the past four hours.

It was then that we knew that something was terribly wrong.

Police officers, in their neon yellow jackets, tens of them, began running down the street towards the blasts.

An endless flow of yellow.

The immediate sense that we needed to get out of there washed over us. We walked quickly down to Newbury Street.

I pulled out my phone and called Steve's dad. "I don't know if you heard those explosions, but we're alright."

They hadn't heard them. Thankfully, the boys were safely in the hotel and hadn't heard a thing. Except for the sirens. The sirens that would continue for hours.

We flowed with the growing crowd. To our hotel. In the door and to our rooms.

We turned on the TV and saw the coverage of the explosions, shared in those same images being broadcast around the world.

Vaguely aware that we had seen it live just minutes before. And it was confirmed that there were bombs.

None of it made sense.

We spent the next hours responding to panicked texts, emails, Facebook messages and tweets from friends and family members.

I heard from Cindy. She was okay, physically.

Televisions were set up in the lobby of our hotel as Red Cross workers, police officers and members of the National Guard lined the streets and flowed in and out of our hotel.

We went to get something to eat, to try to find some normality in the chaos.

Restaurants were instructed to close down shortly after we finished our meals. People were ushered off of the streets.

The city of Boston went quiet. Except for the sirens.

I can only describe the next day as surreal. The streets were very quiet, much quieter than a Tuesday in the downtown core of a major city should be. The sirens continued and people milled around on the streets aimlessly, trying to make sense of what had happened.

We decided to venture into another part of the city, to give the boys a sense of a normal vacation. We found the Freedom Trail and walked past the historic sites, all the time aware of the police and media presence. 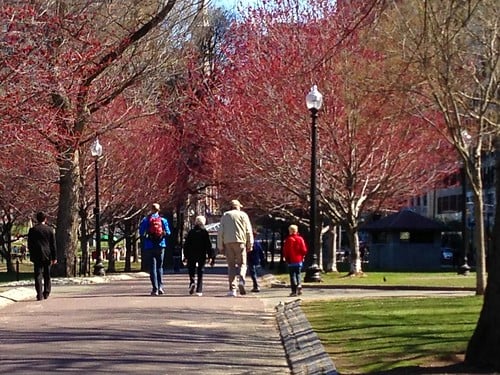 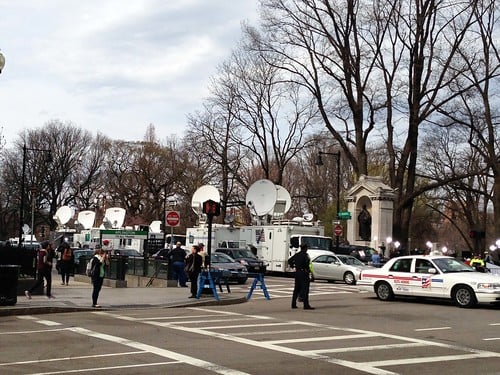 On our way to the Paul Revere House, we came across signs for prayer meetings, resolute Boston citizens offering hugs and hundreds of runners proudly wearing their Boston Marathon jackets. 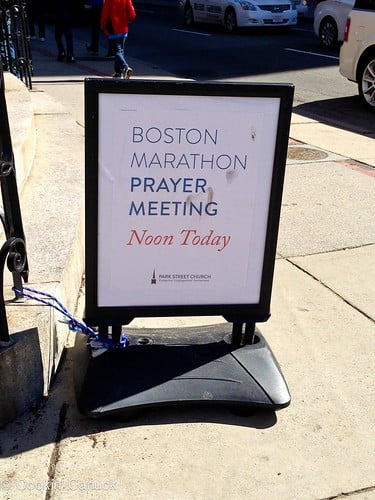 We talked to Bostonians who, teary-eyed and shaken, apologized to us. "I'm so sorry this happened while you were visiting our city." 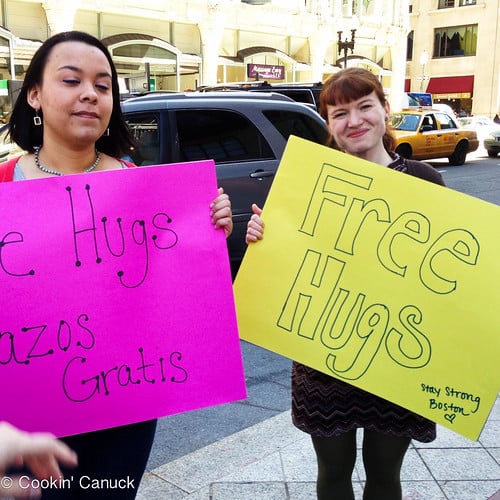 Steve made a decision that day. Next year, he will run the Boston Marathon again.

Those people who set off those bombs, who caused the death of an 8-year old boy, who caused lasting injuries to so many...they were not going to win. Boston and the running community were going to rise above this. 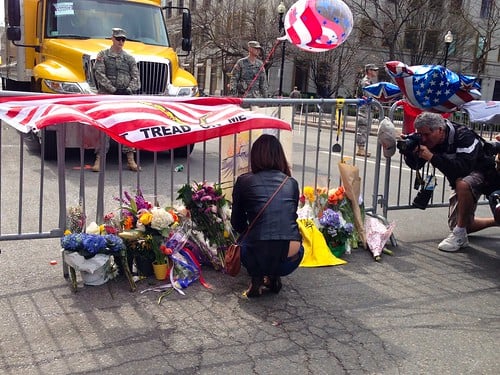 In a chance meeting on Newbury Street, Jeré Longman, a reporter for the New York Times, interviewed Steve for this article.

Here is an excerpt from the article:

My husband's words have been echoed by so many, runners and non-runners alike.

Paul Tergat, who held the world marathon record from 2003 to 2007, was quoted as saying, "Let’s pull together and shame the people who targeted innocent fans in Boston."

Let's do that. But then, let's turn our attentions away from those who set the bombs, and focus on healing. Focus on strengthening the human spirit.

And so we remember the victims and their families.

And we honor them. By running strong.