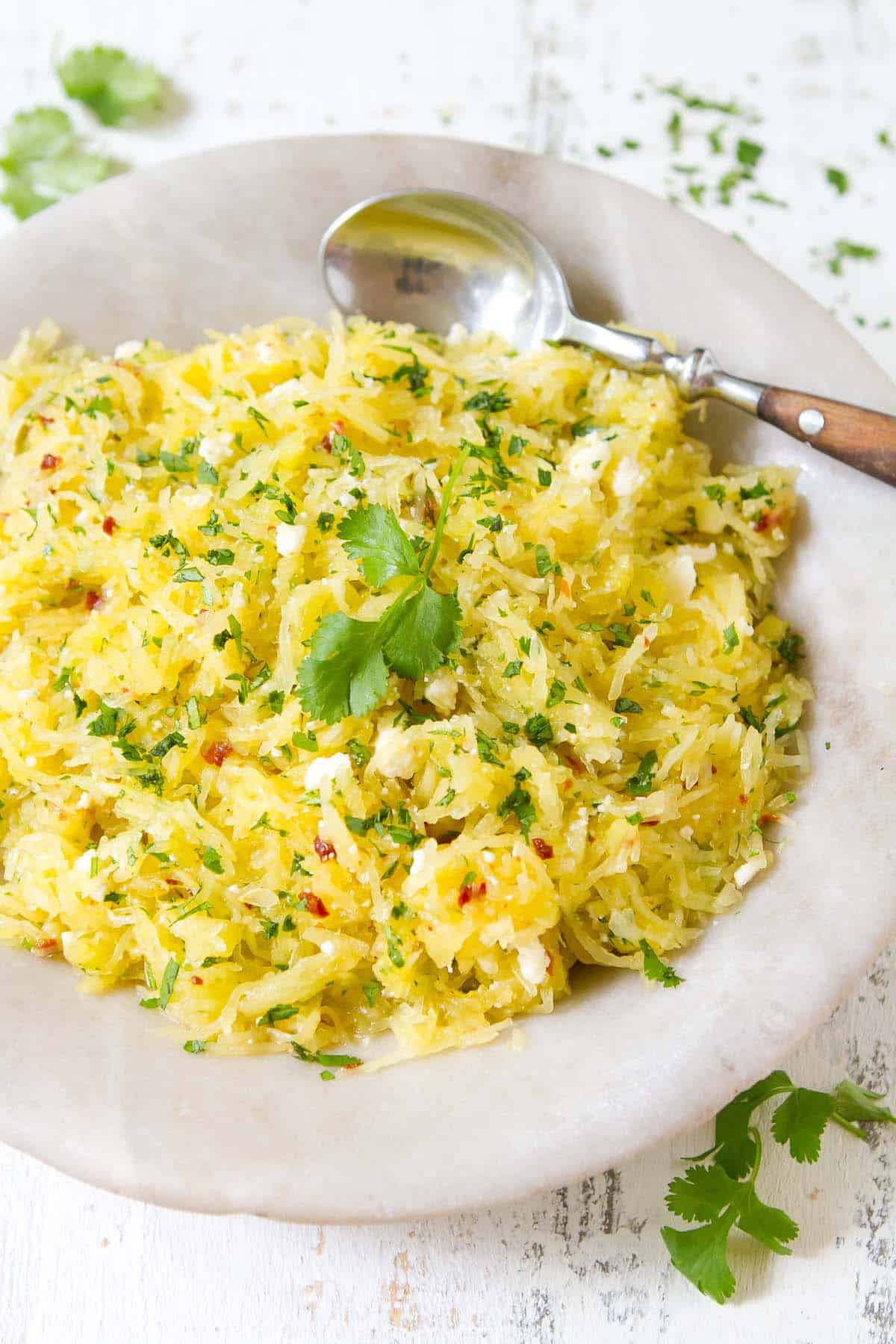 You can never have too many spaghetti squash side dish recipes! Less than 10 minutes of active prep needed! This southwest version gets its flavor from smoky chipotle peppers and salty queso fresco.

Spaghetti squash side dish recipes are a “go to” around here. I first became smitten with this low carb squash when a good friend made this spinach and feta spaghetti squash recipe. It shook my world! Up until that point, squash was a bad word in my vocabulary. But the crunch of the al dente spaghetti squash strands changed my mind.

This easy version has a southwestern flair, thanks to a light dressing of chipotle peppers and olive oil, queso fresco (found in most grocery stores) and a good dose of minced cilantro.

What you need for this spaghetti squash side dish recipe:

These are the main components of this recipe (affiliate links included):

This is the favorite method of most cooks. It can be roasted whole or in halves, though I have the best results when the squash is cut in half and placed face down on a rimmed baking sheet. Scoop out the seeds first, rub the inside of the squash with olive oil and season it, then bake it cut side down in a 400 degree F oven for about 45 minutes.

I admit that on busy nights, I often take the lazy route and microwave spaghetti squash. It produces surprisingly good results! Pierce the squash over with the tip of a sharp knife. Cook it in the microwave, turning halfway through. The cooking time will vary slightly dependent on the strength of your microwave. In my XX watt microwave, a 3-pound spaghetti squash typically cooks in about 12 minutes.

Once it’s cool enough to handle, cut the spaghetti squash using a large sharp knife. Scoop out and discard the seeds, then use a fork to scrape and twirl out the strands.

Why rings? You’ll get the longest strands of spaghetti squash. Using a large, sharp knife, cut the spaghetti squash into rings. Scoop out the seeds, brush both sides with olive oil (and season!) and place the rings on a baking sheet. Roast for about 40 minutes.

What to serve with this spaghetti squash side dish:

Serve it on the side of any southwestern or Mexican-inspired dishes. Here are a few of our favorites:

Can this be made ahead of time?

Yes! Let the spaghetti squash dish cool, then transfer to an airtight container. Store it in the fridge for up to 3 to 4 days.

What happens if spaghetti squash is overcooked?

When cooking spaghetti squash whole, the skin should have a small amount of “give” when you press it. If the skin is collapsing inwards significantly, the squash is likely overcooked.

What can I use instead of queso fresco?

Queso fresco has a very mild flavor, but this dish is very versatile so a bolder cheese would work, too. Try cotija, feta or ricotta cheeses.

Spaghetti squash season typically beings in early fall and extends through the winter. Look for squash that are yellow and firm. Soft spots are a dealbreaker, so set those squash aside. 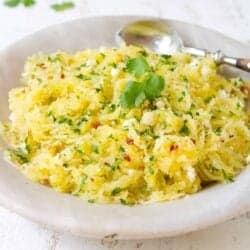 Weight Watchers Points: 3 (Blue – Freestyle SP) / 2 (Green) / 3 (Purple) Note 1: Chipotle peppers are sold in cans in adobo sauce and are typically found in the international aisle. For this recipe, you won’t need the adobo sauce. Note 2: Queso fresco has a very mild flavor, but this dish is very versatile so a bolder cheese would work, too. Try cotija, feta or ricotta cheeses. Note 3: I used Diamond kosher salt when testing this recipe. If using Morton kosher salt, use slightly less than 1/2 teaspoon. Adjust according to your taste. Please note that I am not a medical or nutritional professional. I provide nutritional information for my recipes as a courtesy to my readers. It is calculated using the Sparks nutrition calculator and Weight Watchers points are calculated using the Recipe Builder on their site. While I attempt to provide information that is as accurate as possible, you should calculate the nutritional information independently before relying on it.