This Asian-inspired slaw is filled with cashews and pear, then tossed in a simple ginger dressing. Serve it as a side dish or on top of teriyaki chicken. 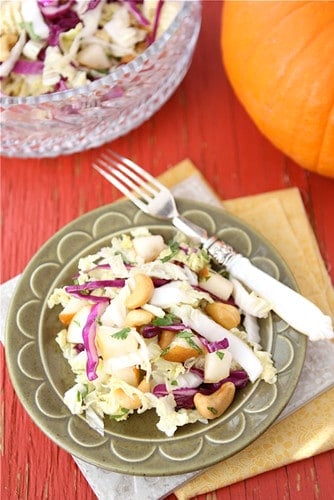 I'm not kidding when I say that I could eat this salad all day long. Not only is it dressed with a vinaigrette made of some of my favorite flavors, ginger and sesame, but it is healthy and refreshing, which is a nice contrast to some of the heavier stews and soups that are passing across my stovetop. While cabbage, cashews and pear may seem like a mismatched team, the sweet and nutty flavors work as well as football players on Dancing with the Stars. Seriously, who knew those big guys could be so light on their feet?

After our bout of snow, we have been spoiled by a gorgeous October, with temperatures in the mid-sixties and abundant sun warming us to our core. I've actually been wearing shorts on my daily runs, though I don't claim it's been pretty (faded suntan makes for glowing white legs). As though sensing that our mild days are numbered, the boys spent most of the weekend outside, playing on the swings, kicking the soccer ball around and making "nature stew" in their dumptruck. What is nature stew, you ask? Soft tomatoes from the vine, sage and mint leaves, grass and the odd weed. I'm sure some little garden creature will have a feast.

My husband and I are pulling the remaining pears off of our little-tree-that-could, which provided plenty of fruit this season for Crockpot Pear & Ginger Applesauce. As much as we enjoy eating them straight or in applesauce, the pears add a natural sweetness to salads such as this Asian slaw. This salad is the last hurrah before the cold weather hits this week and I am savoring every last bite of it. 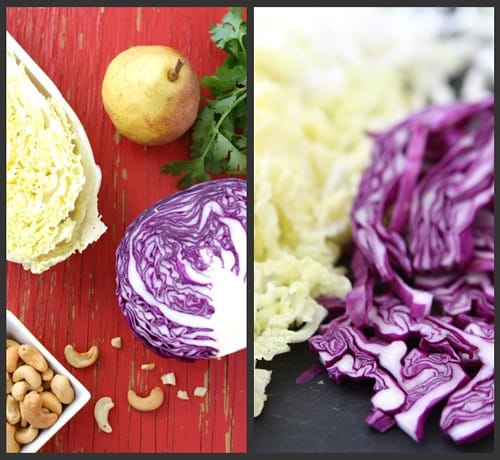 For the dressing: In a small bowl, whisk together rice vinegar, sesame oil, canola oil, lime juice and grated ginger. 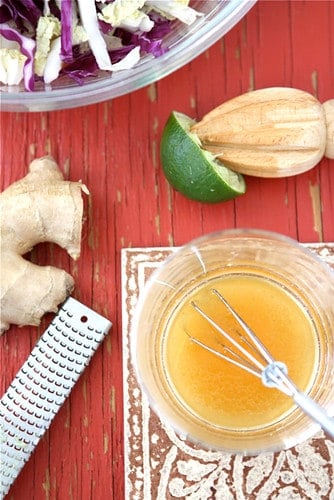 Pour the dressing over the cabbage mixture and toss gently to coat. Serve. 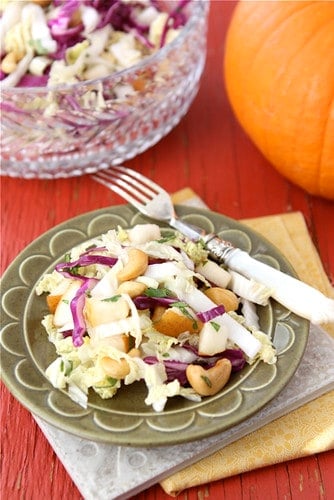 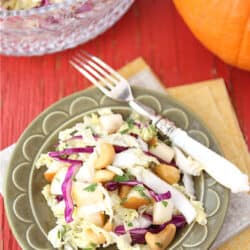